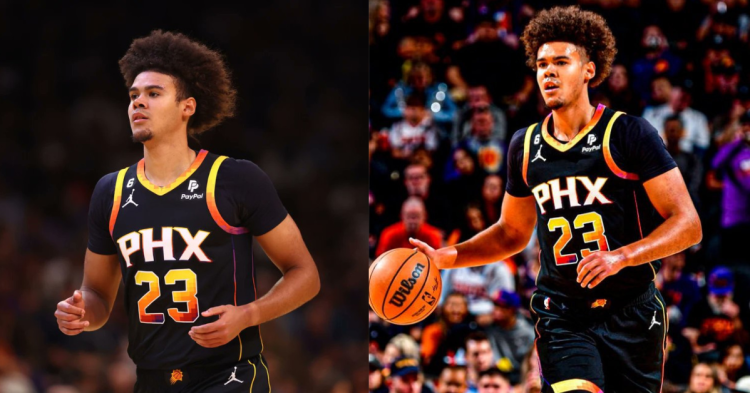 The Phoenix Suns have continued their red-hot streak from the last few seasons and currently sit second on the Western Conference rankings with a 7-3 record behind the rampant Utah Jazz.

The Suns’ steady rise in previous years has made them one of the most dominant teams in the NBA, with players like Devin Booker, DeAndre Ayton, Chris Paul, and the now-starting Power Forward Cameron Johnson being at the heart of their success.

Suns forward Cam Johnson had surgery today that removed part of his meniscus, a procedure that should allow him to return in 1-2 months, sources told ESPN.

Cam has been one of the best players on the roster as the Suns have swept away opponents in a fashionable sense, scoring 100+ points in their last nine games with only two losses to their name.

What happened to Cam Johnson?

Power Forward Cam Johnson came off against the Portland Trailblazers on November 5, 2022, in the Suns’ second-season loss.

According to The Athletic’s Shams Charania, Johnson was subbed off with doubts that he suffered a torn meniscus in his right knee during the match and would have been unable to further partake in the game. The Suns’ immediately stated on Twitter that Johnson would not rejoin the game.

Cam Johnson is out for the rest of the game with a knee injury after he went to the locker room midway through the first quarter. Here is what Al McCoy and Tim Kempton saw. pic.twitter.com/FimLYvpyOz

When asked about Johnson’s injury, teammate Chris Paul stated, “This ain’t it. This is just a hurdle he’s gonna have to overcome, and we’re gonna be right there with him.”

Johnson has become a massive part of the Sun’s success, and his absence will be a huge blow to the team as he was impacting the game on a high-level averaging 13 Points per game and 1.8 Assists per game and ranks second in 3PT% at 43.1% behind joint leaders DeAndre Ayton and Mikal Bridges on 50%.

Cam’s injury was a concern for the high-flying Suns’ team, but reports today suggest that Johnson had successful surgery that removed a part of his meniscus. The team expects him to be available after 1-2 months.

Johnson’s absence will leave a void, which would have been Jae Crowder’s to fill had he not declared his desire to leave the Phoenix Suns. The Suns are looking for a potential trade option for Crowder since he made himself unavailable for selection due to lack of game time.