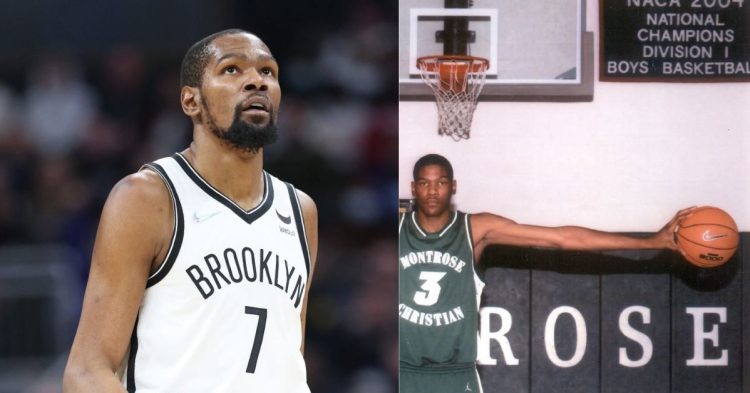 Kevin Durant has been floating around the headlines for the past few days. His trade request to move away from the Brooklyn Nets, despite his good friend Kyrie Irving committing to stay, has earned him the limelight.
KD is one of the tallest NBA players on the planet. Not only that, his wingspan stretches to more than 2.2m, making him truly a big destroyer. His hand size is also one of the biggest in the league. Despite all this, many claim that Kevin Durant is not able to palm an NBA basketball. The question is, can he?

There have been rumors floating around for a while that KD can’t palm a basketball. It is in fact a surprise when anyone hears it. It’s hard to believe someone of his size is unable to do something that average-sized humans can. Durant wasn’t always this big. He was considerably small in 2007 when the Seattle SuperSonics, later changed to Oklahoma City Thunder drafted him.

A pre-draft report got leaked back in the day. It was mentioned in the draft that out of 80 prospects at the combine, Kevin Durant was the only one who could not bench 180 pounds. Radio host Colin Cowherd even said, “he’s a wing guy that can’t bench 185.”
Durant has even admitted himself that he can’t palm a basketball. He has said, “No I can’t. It’s nothing I control.” It was back in 2014 when he admitted it. We all have to agree that it was actually a bold move, considering how fans react to every trivial thing. You may remember a photo where he is holding basketballs with his palm. He would’ve been wearing a Montrose Christian jersey. KD later explained that those balls “weren’t fully inflated”.

KD on if he can palm the ball: “No, I can’t. It’s nothing I can control. I don’t know what else to say…I don’t know why this is a story.”

KD has now bulked up and looks a different man compared to his 2007 self. He weighs around a mere 215 pounds back in 2007, the year the SuperSonics drafted him. Now, he’s at 240 pounds and looks a lot bigger. The Nets star can now bench press 315 lbs. Even this number could be in fact now on the rise. The video came out 6 years ago, and the American surely looks stronger now than he did then.
Tags: Kevin DurantNBA
Previous Post