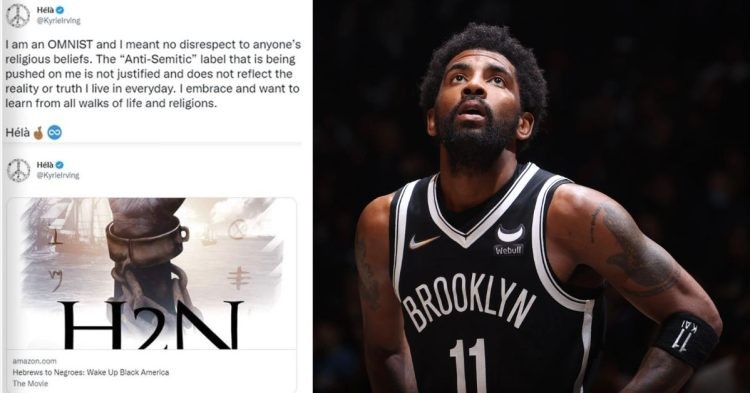 Recently, the world turned on Kanye West after he promoted hate speech and anti-Semitic remarks. Similarly, Kyrie Irving also followed suit to do the same. For the fans that do not know, Kyrie posted a tweet about a movie that promotes anti-Semitic views. Although he did not say anything else, he received plenty of criticism for his tweet.

One of those to publicly criticize him was Brooklyn Nets owner Joe Tsai. He mentioned that he would make sure Irving knew how he has hurt plenty of people. Kyrie has responded to all his critics recently.

I am an OMNIST and I meant no disrespect to anyone’s religious beliefs. The “Anti-Semitic” label that is being pushed on me is not justified and does not reflect the reality or truth I live in everyday. I embrace and want to learn from all walks of life and religions.

In a tweet, he said, “I am an OMNIST and I meant no disrespect to anyone’s religious beliefs. The “Anti-Semitic” label that is being pushed on me is not justified and does not reflect the reality or truth I live in everyday. I embrace and want to learn from all walks of life and religions.”

Kyrie clarified that he did not mean offense to any religion and that the “anti-Semitic” narrative was just pushed on him. However, it seems like fans did not take the tweet well as they took to Twitter to express their thoughts. A fan wrote, “Can you just be normal for one season bro I [beg] you.”

The fan’s tweet was an indication of how Irving has always been involved in various controversies every season. For example, last season, it was the fact that he did not want to receive a vaccination, which attracted plenty of attention too. This time around, it has reached a larger audience. A user claimed that Kyrie was shame and that he should have some accountability for what he did.

You are a shame as a role model.
Endorsing a publication with anti-Semitic messaging, especially with a platform as large as yours.
Take the L. Take some responsibility for your negative actions for once in your career.

Many on the social media platform claimed that the Brooklyn Nets star should take responsibility for what he did. Even though Irving said he was an “Omnist”, which means respecting all the religions, fans believe Kyrie’s apology doesn’t change anything.

Don’t share links to anti-semitic documentaries and people won’t label you as anti-semitic.

It seems like things can’t get any worse for the American player at this point. Another fan even mentioned that Kyrie just shouldn’t be defended by people.

You can’t roll out antisemitic tropes and get away with it because there’s history behind the tropes. It’s amazing how obtuse people are about this, to the point where I assume it’s purposeful. This dude thought the world was flat and people are still defending his 🧠

They brought back the time when Kyrie expressed to the world that he thinks the Earth is flat. At that time, he had to apologize to the public too, when science teachers came up to him and said that they had to teach their curriculum again.

When you endorse something Anti-Semitic, and then double down on that endorsement, you may very well be anti-Semitic.

One people’s struggles is not an excuse to hate another people.

Maybe learn that we’re all in this together, and there’s no place for that kind of hate?

It is quite evident that fans do not buy Kyrie’s apology. The common opinion is that he should not have posted the tweet in the first place. Moreover, fans believe that there is no narrative being pushed on him, and that people simply think he is anti-Semitic because of the tweet.