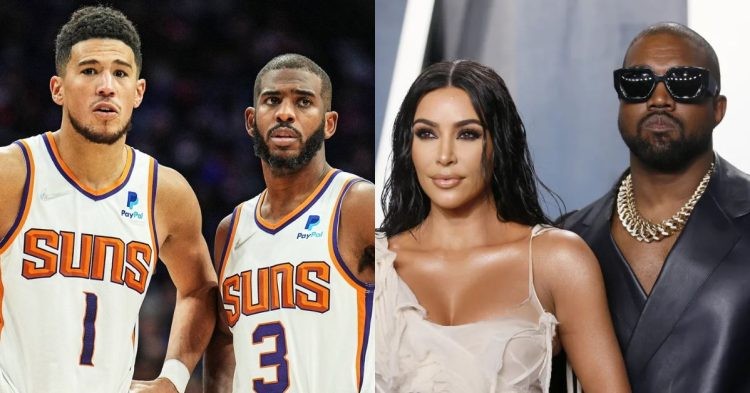 Rumors of Chris Paul having an affair with Kim Kardashian has caught the world off guard today. The news came to light after American rapper Kanye West accused the Phoenix Suns star of cheating. The NBA world was not ready for this news as no one expected CP3 to cheat on his wife.

Along with Paul, LeBron James’ name has been dragged along by NBA fans as well. Many believe that his marriage with Savannah James might be at risk now that his friend has been accused of cheating. Amid all this, Chris’ teammate at the Suns, Devin Booker is also being spoken about by fans. For those who don’t know, Devin Booker was in a relationship with Kim’s sister, Kendall Jenner.

However, just over a couple of weeks ago, reports emerged mentioning that the pair broke up. It was quite a secret breakup and no one saw it coming for the star couple. NBA fans believe that DBook played a role in Chris Paul’s affair with Kim.

A large group of NBA fans on Twitter believe that Booker set Paul up with Kim. One tweeted the iconic image of Michael Jordan and Dennis Rodman sitting on the bench during a game and implied that it was DBook and CP3 at the Kardashian house.

Devin Booker with one of the greatest assist ever. Chris Paul might lose the only ring he ever had. pic.twitter.com/mrHTG9BXn9

Devin Booker walking past Chris Paul on his way into the Kardashian manor pic.twitter.com/wCEDaCGyIK

The common opinion among most of the fans is that Booker and Paul even built their chemistry off the court by dating the Kardashian-Jenner sisters. The Suns players have played with each other for a total of 127 games till now.

A fan even tweeted the image of Kyrie Irving and LeBron James’ legendary performance against the Golden State Warriors in the 2016 NBA Finals. It seems like many believe that was the off-the-court situation with Kendall and Kim for DBook and Paul. Most of the fans are saying the same thing; that Booker helped Paul to have a relationship with Kim. It seems like the young Suns player is facing the blame for his teammate’s affair.

Devin Booker and Chris Paul at the Kardashian house pic.twitter.com/1Br3eh5PBF

Paul has been married to Jada Crawley since 2011. Till now, the couple has not been hit with any controversies, just like Chris. He has kept himself away from the public eye most of the time and has not found himself in trouble.

It seems like Ye wanted to put an end to that when he dragged Chris’ name into some serious accusations. If these allegations are true, it might end their 11-year marriage. And considering the fact that the fingers have been pointed at Booker right now, it might happen again as well. We can only wait to see how this plays out for Chris Paul and the other parties concerned.