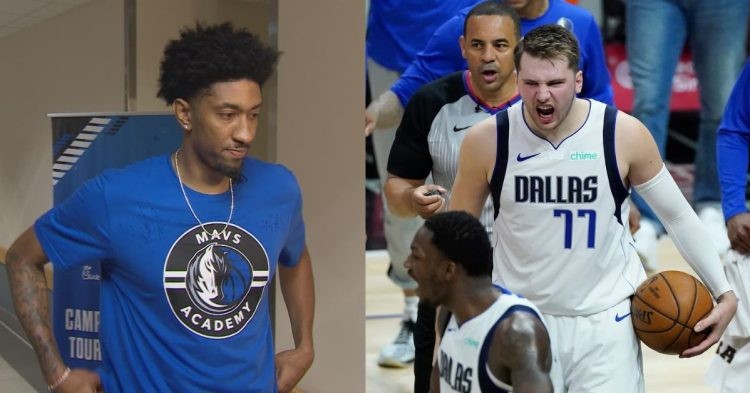 Christian Wood is the latest addition to the Dallas Mavericks and a new teammate for Luka Doncic. The Mavs were looking to put solid players around Doncic to become contenders and managed to sign on Woods from the Houston Rockets.

This is the first time Wood and Doncic are playing as teammates on the same team. Christian revealed what he opined to be the most annoying habit Luka Doncic displays when on the basketball court. One should wonder what he said about his fellow co-star and how much truth there could be to it.

Chrisitan Wood is emerging as a legitimate talented big man in the NBA. He is 27 years old and listed at 6 ft 10in. His size allows him to be an excellent rebounder and finisher at the rim. Wood averaged 14 points and 7 rebounds so far in his career. He developed furthermore this year and is currently averaging 17.3 points and 8.4 rebounds. Additionally, he is also shooting an efficient 58% from the field and 47% from the three-point line.

The Dallas Mavericks roster was interviewed on media day. There, they were all asked what they considered to be the most annoying trait or habit displayed by Luka Doncic when on the basketball court. Here is what Wood had to say when asked the same question.

Quite the amusing reveal by the NBA star. We all knew that Doncic had an excellent basketball IQ. However, the confidence to run the same play over and over again, believing the opposing team and coach will not read into it, requires an unreal level of confidence.

We hope that Chrisitan Wood is soon able to understand how to play better alongside Doncic. If they manage to get things clicking, an NBA title is the only real ceiling for this talented Mavericks team.