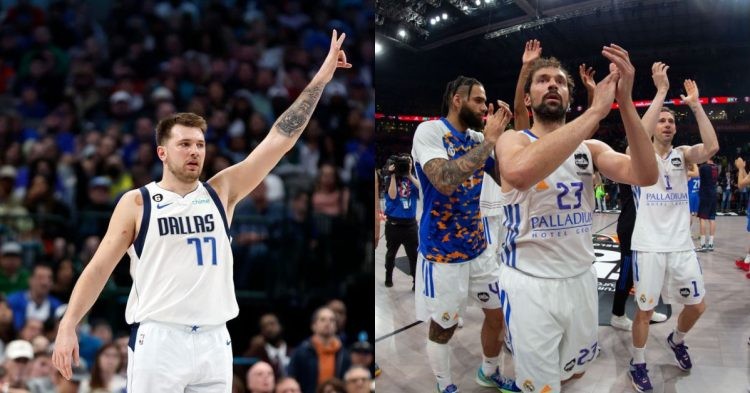 Luka Doncic, superstar point guard and franchise cornerstone for the Dallas Mavericks, has been on an absolute tear lately. Leading the league in scoring with 34.0 points per game, he is putting up unreal numbers on the box score on a nightly basis. As a result, the Dallas Mavericks are enjoying a winning high like no other.
Currently sitting at 4th in the Western Conference, the team is looking to make a deep playoff run this season.

All of that has been made possible largely because of Doncic’s scintillating form, which has also put him firmly in the MVP conversation. The last time Doncic won an MVP award was in 2018, in the EuroLeague. He led his team, Real Madrid to the title and won the EuroLeague MVP and the Final Four MVP.

Is a matchup between Luka Doncic and Real Madrid in the works?

Last October, Cuban mentioned that he had had this idea in mind for a long time. He stated, “I don’t know if we can play a pre-season game in Slovenia, but we’re working very hard to play one against Real Madrid,”

This idea had been in the works since Doncic joined the franchise in 2018, and it finally seems to be materializing, albeit a few years later due to the COVID-19 pandemic.

The game is supposed to take place in the 2023 NBA Preseason. And the possibility of a doubleheader between these two teams is also not too far-fetched. While one of the venues being agreed upon is, obviously, Spain, there might be another one in the works.

Luka Doncic will now get a chance to face off against his former team Real Madrid during the preseason 🔥 pic.twitter.com/pgeCt7jdqn

The United Arab Emirates is considering a large-scale offer for the EuroLeague, of which Real Madrid is a renowned member, to host games in the Middle East. If this goes through, we could be looking at an exciting doubleheader between Luka and his former team.

Luka averaged 12.8, 5.0, and 5.7 in his last season with Real Madrid, in which he also led them to the EuroLeague title.