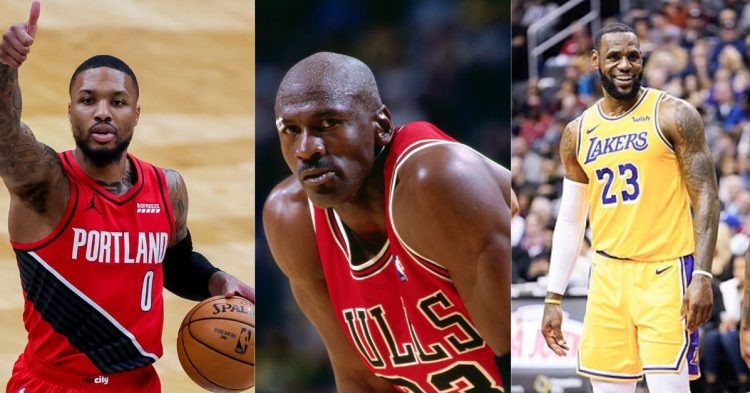 Damian Lillard is the star point guard for the Portland Trail Blazers. He is known for showing loyalty to and staying with his team throughout his career. This is despite their inability to put strong surrounding players around him. He was interviewed and asked about the infamous “GOAT” question.

It seems quite redundant to state that there is a debate on who is the greatest player of all time. LeBron James and Michael Jordan are the two players that the majority of analysts compare. Each NBA player has their own opinion on who could be the greatest. However, there was no hesitation in Lillard when asked who he thought was the GOAT.

Dame has never made a single NBA Finals trip. This is despite having consistent star-level scoring numbers throughout his career. Lillard has been averaging 24.6 points, 6.6 assists, and 4.1 rebounds. Additionally, he has been shooting 43% from the field and 37% from the three-point line.

Yet his team has always been eliminated in the NBA postseason. Any team with two superstars such as the Denver Nuggets could overwhelm Dame and force him into 7 games. Let alone a fully-loaded dynasty like the Golden State Warriors. Stephen Curry and his team managed to always stop and defeat Lillard in the Western Conference Finals at the most to advance to the NBA Finals.

Despite constant failure Dame has shown no signs of wanting to go “ring chasing” like many NBA stars chose to do. This is very similar to what Michael Jordan went through. Jordan never switched teams throughout his whole prime. He spent it winning 6 NBA titles with the Chicago Bulls. That is why Dame chose Jordan.

“It’s just different when you talk about MJ. On the floor, it’s just never been nobody like him… nobody electrified the crowd like him. You know Air Jordan shoes… It’s Jordan… Bron is definitely I mean that’s a conversation to be had but I think most people would look at Jordan as the GOAT“.

Dame has been around the league since 2013. This was when LeBron James was still with the Miami Heat superteam he created to try to win an NBA Championship. This is very different than Jordan, Steph, Kobe, and Lillard himself. Therefore, he had good reason to choose MJ in the end.