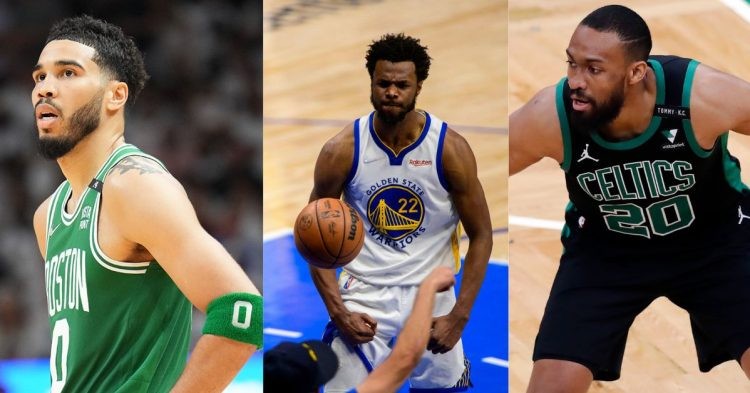 Andrew Wiggins and the Warriors are one game away from eliminating Jayson Tatum and his Celtics from the playoffs. Maple Jordan is probably the only Warriors starter that doesn’t have a lot of Playoff experience. But that didn’t stop him from putting on a show to take a 3-2 lead over Jayson Tatum and the Celtics.

He put up 26 points while shooting the ball with extreme efficiency. Stephen Curry was having a rough go of it during game 5 and when the Warriors needed it most Maple Jordan was there for them.

This Tatum tweet from 2012 didn’t age too well 😅 pic.twitter.com/HdxA4FUTTC

The situation is almost poetic because the last time Jabari Parker played a game in the NBA, he did so while wearing a Celtics jersey. After, cutting Jabari Parket from their team The Celtics are now one game away from being eliminated by Wiggins and the Warriors.

Despite an efficient showing by Jayson Tatum, the Celtics were unable to take advantage of a rare Stephen Curry off night and ended up dropping game 5 to the Warriors. Now, after losing two in a row Boston needs to win two in a row if they want that championship.

But, between all the careless turnovers and abysmal shooting percentages, we’re not sure that they can pull it off. There will probably never be another playoff game where Stephen Curry doesn’t make a single three. Additionally, Wiggins has been extremely consistent and will likely keep this up following game 5.

Now, with Game 6 around the corner, we’re also in for an appearance from Game 6 Klay. The Celtics might be able to play better basketball but with how careless they’ve been with their 2-1 lead it might be too little too late.

But, it ain’t over till it’s over so we can’t count them out just yet. There are still 2 games left and anything can happen within these 96 minutes of basketball. It’ll be interesting to see how the Celtics switch up their game plan now that Wiggins has also settled into the Finals atmosphere.