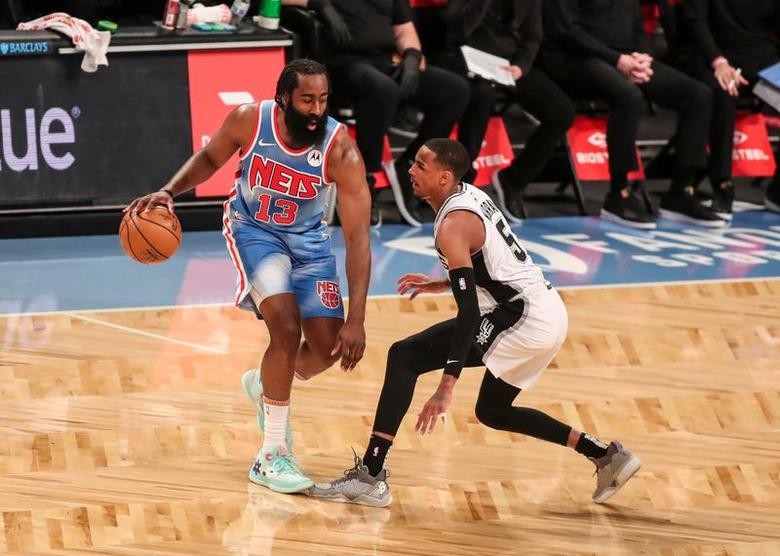 The James Harden and Dejounte Murray rivalry is one that has fallen under the radar. Mostly because Dejounte is not on the level of James Harden. Signs of it has been prevalent since 2019 when James played for the Houston Rockets and now it has reached a new level.

James lets his frustration get the better of him and it leads to him doing some rather petty or dirty things. In a game earlier this year, Dejounte Murray jumped to intercept a pass and stop a fast break opportunity against the Brooklyn Nets. Dejounte Murray is a really good defender and under coach Pop he’s become even better.

Whilst in the air, James Harden put his foot out in an attempt to trip Murray. If Murray would’ve landed awkwardly his career could’ve been jeopardized. It was a play as dirty as the one Zaza did on Kawhi.

Dejounte saw this video and snapped back at Harden in a now deleted tweet. Even upon the existence of this video the NBA did not take any disciplinary actions against James Harden.

What reignited this feud between James Harden and Dejounte Murray?

In Game 1 against the Milwaukee Bucks, James Harden re-injured his right Hamstring less than a minute into the game. He left the game and did not return. He left the building to go get an MRI done. This injury has been a reoccurring one for James Harden and might affect the Nets playoff Success.

On hearing of this news, Dejounte Murray’s dad John Murray tweeted out this controversial statement.

James Harden is out due to a hamstring injury…. Karma is a Bitch…. Shouldn’t have tried to trip my son. I don’t wish injuries on anybody but since it happened… Fuck it 😂

He has gotten a lot of hate for this tweet and deservedly so. Harden was the player in the wrong for his dirty play on Murray but this tweet puts his Dad on the same level.

“All these Hardens fans in their feelings… Any father would protect his kids in any way. I never wished bad on him… It happened and I’m saying “IDGAF” Grow some balls… Y’all too soft for me

Taking the high road in a situation like this would’ve been favorable for Dejaunte Murray’s dad despite what Harden may or may not have done in the past.