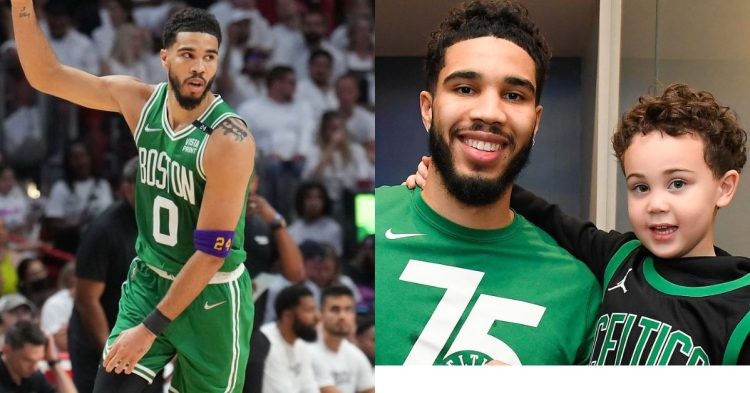 Jayson Tatum and the Boston Celtics have made the NBA Finals. His son, Deuce has always been his biggest fan and supporter. Deuce is 4 years old and much too young to know what celebrating prematurely means. However, he did not hesitate from bestowing a gift to Jayson for his performance so far.

Deuce gifted his father a ring in a cute little box. It is unclear whose idea the gift was and who paid for it. However, it is most likely that Deuce personally chose this gift himself to give the NBA superstar. His father probably deserves it most this season.

Jayson has elevated his game this season. He has helped the Boston Celtics eliminate the best teams in the Eastern Conference. Therefore, he has already proven himself capable of going toe to toe with championship-caliber opponents such as Kevin Durant or Giannis Antetokounmpo.

Many NBA analysts have picked the Boston Celtics to win this NBA title. This is because they are considered to have been through a more challenging and testing postseason. They faced two game 7’s to make it to the NBA Finals. These were against the Milwaukee Bucks and Miami Heat. However, neither of these teams was able to close out Boston. Additionally, Tatum averaged better numbers to keep the Celtics in contention and avoid elimination.

Deuce Tatum may not understand the exact gravity of the situation his father is in and what is going on. It is highly unlikely he knows exactly what it took for Tatum, Brown, Smart, and the Celtics to make their first NBA Finals. After all, they have never made it this far into the postseason since his birth.

In any case, it is a beautiful sight to see Deuce gifting JT this ring. It may be a bit premature. However, it is unfair to expect a 4-5-year-old to pick the most opportune moments to give his own father a gift. Hopefully, Jayson will be able to add a championship ring to the one Deuce already gave him.