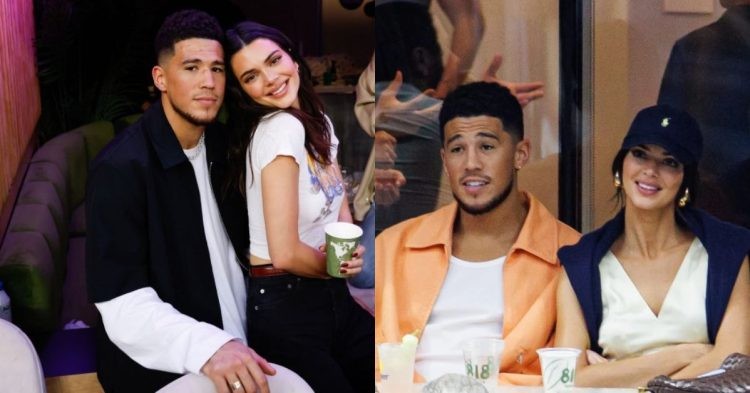 Devin Booker and Kendall Jenner are one of the most famous couples in the NBA. DBook is the face of the Phoenix Suns franchise, which has seen a massive rise in the last few years. On the other hand, Kendall is a supermodel and hails from the world-famous Kardashian family.

The power couple has been seen together many times in public. Kendall has even rooted for her boyfriend at many of the Suns games. However, it seems like that will be put to a stop right now. Reports have emerged mentioning that Kendall and Booker have broken up.

According to PEOPLE, the pair have chosen to split, because of their conflicting schedules. DBook is one of the best young players in the league and that means that he puts in the work required to reach that level. Similarly, Kendall is extremely successful in her modeling career as well. Many sources report that she is one of the highest-paid models in the world.

Kendall Jenner & Devin Booker split over a month ago after two years of relationship – People.

“A source said, ‘They both have incredibly busy career schedules right now and have decided to make it a priority.’

“They love and respect each other very much and want only the best. pic.twitter.com/Yh94c10TC2

The fact that both Booker and Jenner are quite successful in their respective fields shows that they aren’t willing to compromise their careers. Booker started dating Jenner back in 2020, according to PEOPLE. However, they kept their relationship under wraps until Valentine’s Day in 2021. Kendall posted an Instagram story with Devin that day.

The ex-couple continued their relationship from then on. However, rumors of their split flooded the internet in June 2022. Not many knew the reason for their split back then, but fans were quick to troll both Kendall and Book with their memes. However, Kendall squashed those rumors with another Instagram of an adventurous date with the Suns star. The pair appeared to have gone ziplining together.

The 27-year-old model has also publicly revealed her support for Booker this year. She said on Jimmy Kimmel Live, “I watch every game unless I have—last night I had a dinner but all my friends and family know that I like sit with my phone wherever I am. I’ve always been a fan of basketball since basically with Khloe. I remember we used to go to all the Lakers games when I was really young so I’ve been a huge fan of the NBA for a really long time.”

It seems like DBook will be missing a huge supporter in the arena for the upcoming games. However, although the reports may be solid, their relationship has caused rumor fests in the past. There has been no official confirmation from either party that they have broken up.