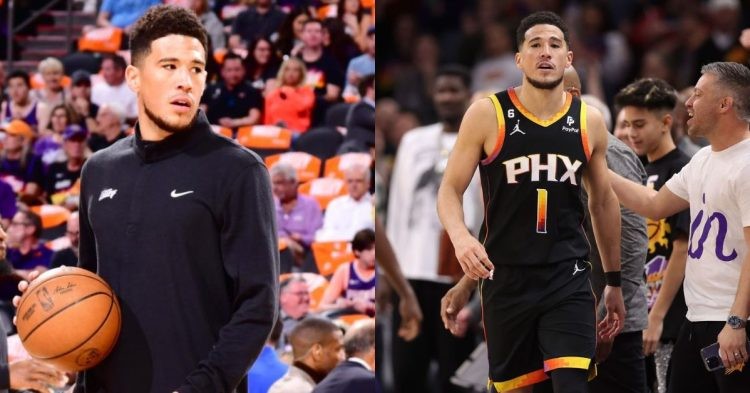 Devin Booker might be sidelined for the foreseeable future. This is truly disappointing news for Phoenix Suns fans and will certainly affect his team. As NBA fans remember, Chris Paul, Devin Booker, and the Phoenix Suns made the NBA Finals back in 2021.

They were the top seed in the Western Conference last year and appeared to be off to a good start this season. Unfortunately, both CP3 and now Booker will have missed a significant amount of time. Fans might be interested in knowing what is going on with Devin and what his return timetable could look like.

The Phoneix Suns have certainly been struggling to win in the absence of their star. They currently hold a record of 20 wins and 18 losses, giving them the 8th seed in a competitive Western Conference. This is quite a bad time to lose Booker.

People remember that Devin Booker sat out 3 games prior to Christmas day due to groin soreness. While he did play on Christmas against the Denver Nuggets, he clearly reaggravated it within a few moments and was soon sidelined from the match. He has not played for his team since then.

The Suns better get used to playing without their best player for the foreseeable future. According to NBA Insider Shams Charania, Booker is expected to miss at least 4 weeks for the Phoneix Suns. That would mean until late January at the very least. He will be reevaluated then and we will have a clearer picture of his return to the court.

In any case, this will mean a significant amount of stress and pressure on Chris Paul, the veteran leader of the Suns. We remember that Phoenix only became contenders after he signed with them heading into the 2021 NBA season. Despite being in the back end of his career, Paul will have to keep the team afloat.

We hope that Devin Booker is able to successfully complete his rehabilitation and make a return to the court in 4 weeks. Any longer and the Pheonix Suns might find themselves in an uphill battle for seeding the rest of this season.