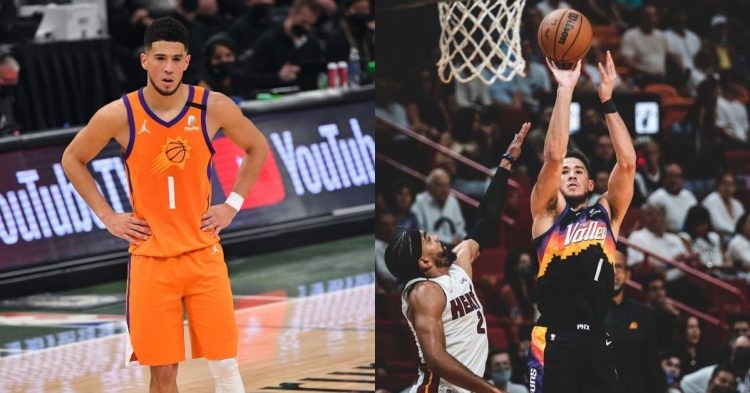 Devin Booker is probably the best thing to happen to Phoenix since Steve Nash. Over his 7-year career, Booker has put up 23.5 points, 4.7 assists, and 3.9 rebounds per game. Earlier in his career, Booker was heavily criticized for his lack of effort on defense. Slowly but surely he has made strides and has improved on that aspect of his game.

Booker has been a part of 2 all-star games and just this past season he even made it to the All-NBA 1st team. When you’re racking up accolades like Booker while being the most important piece on a championship-contending roster, you are bound to get paid.

Back when Booker was drafted by the Suns they were a 39-win team who failed to make the playoffs. The very next season they drafted Devin Booker and signed him to a 4-year $9,985,165 contract.

Ever since then they have completely turned the franchise on its head. Built around Booker, they currently have a squad consisting of DeAndre Ayton and Chris Paul. Booker was eventually signed to his second NBA contract worth $158,253,000 over 5 years.

Now, after the Suns have been to the NBA Finals and are consistently making deep playoff runs. Booker has again been offered a supermax contract extension worth $214M over 5 years. This will net him an average salary of $42.8M per season. Let’s have a closer look at what Devin Booker has made over the years.

What is Devin Booker’s NBA salary per season?

He has a shoe deal with Nike that pays him somewhere in the neighborhood of $4M. Booker regularly sports rare Kobe shoes and even helped design a custom Nike Kobe 5 Proto.

Booker is a Brand Ambassador for Astro Gaming and regularly plays Warzone with the public while using Astro Gaming equipment. He has done commercials for both Foor Locker and Corona Beer. All of these endorsements add up to about $3M-4M annually for Booker.

Apart from this, Booker also has his own gluten-free energy drink called Coco5.

Devin Booker is amazing on the court and even better at getting paid off the court. It’ll be interesting to see how the Suns set him up for success after the Off-season.