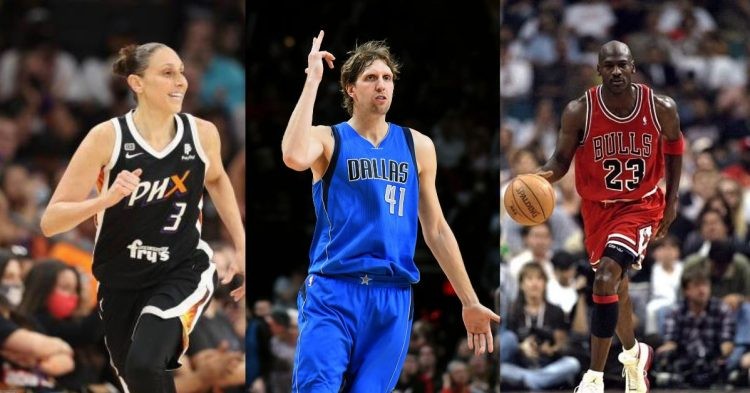 The WNBA has been around since 1996. Several female athletes have emerged from this league. Diana Taurasi is one such player. She has accomplished a feat that puts her in the distinguished company of NBA legends Michael Jordan and Dirk Nowitzki.

There are several skeptics among us who criticize the WNBA and compare its flaws to the NBA. However, there is no way to find fault with or make light of what the Phoenix Mercury star has done. We need to understand the importance of what she has proven.

Diana Taurasi, Michael Jordan, and Dirk Nowitzki are the oldest players to score a 30 piece

Every player is only capable of dominating for so long in any professional league. Some are one-game wonders, most have a good season or two. The undisputed best players are the ones who have been able to perform at the highest level for the longest period of time.

The majority of players in any professional basketball league average between 10 and 30 points per game. Scoring 25 points is considered a solid night for a young player and having a “30 bomb” means the player was on a roll in the game.

Diana Taurasi joins Michael Jordan and Dirk Nowitzki as the only players in WNBA/NBA history to record a 30-point game at age 40 or older 👏 pic.twitter.com/UEL9Y8dREp

MJ and Dirk accomplished this as they were both very physically gifted. Additionally, they did so when they were 40 years old. Taurasi has managed to do the same. Her team, the Phoenix Mercury, defeated the Los Angeles Sparks 90-80 in the game. She also had 6 rebounds and 2 assists on this special night for the 40-year-old star.

There are some adults in this world who struggle to get up quickly without straining their backs at the same age. Therefore, we should really wonder what kind of conditioning and training is required to maintain peak performance towards the back end of one’s career. It also requires a true love for the game and a desire to compete till the very end.

Jordan was with the Washington Wizards, coming out of retirement for a second time when he accomplished this feat. Dirk was still with the Dallas Mavericks, a team he carried to an NBA championship in 2011. Diana Taurasi accomplishing a similar feat makes a case for her as a WNBA goat.