The 2021 NBA All-Star game was largely a success despite the pandemic with minor unavoidable mishaps. Team LeBron had a blowout victory over short-handed Team KD. This game saw arguably the best backcourt in NBA, Stephen Curry and Damian Lillard together in action. 3-pointers were raining throughout the game.

While Stephen Curry took over the first half, Damian Lillard drilled back to back 3s in the fourth and hit the game-winner when Steph came up short in the previous possession. It was as though Stephen Curry and Damian Lillard were having their own little half-court shot contest during the game. Both players put on a show for the audience at the stadium and online viewers.

There were a lot of veterans participating in the Skills Challenge and 3-point contest this year, trying to redeem themselves. Domantas Sabonis from the Indiana Pacers won the Skills challenge beating Chris Paul, Nikola Vucevic, Luka Doncic, Julius Randle, and Robert Covington.

The 3-point contest on the other hand was won by the greatest shooter of all-time Stephen Curry. He put up most points in the first round and advanced to the second round with Mike Conley and Jayson Tatum. The last money ball was the deciding shot and he made it to get himself the second 3-point contest trophy. He muted all the trolls online who question him after every off night. In addition, his long time rival, LeBron James discerned his inhuman skills after the All-Star game.

Also Read: Here’s What Joel Embiid Had to Say About Last-Minute Rule Out from the All-Star Game 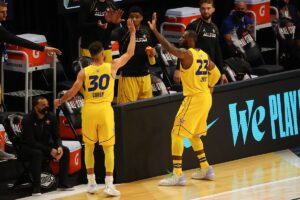 The four years of rivalry between the Cleaveland Cavaliers and Golden State Warriors needs no introduction. Arguably top 2 players in NBA, LeBron James and Stephen Curry faced each other from 2015 to 2018 where the former took most Ls. While they were cordial off the court, both players played with a chip on their shoulder when they faced each other on the court.

By the way @Dame_Lillard & @StephenCurry30 simply ain’t fair!!! I literally kept telling them to back up further and further to shoot and what did they do?? EXACTLY 🤦🏾‍♂️

Prior to 2018 LeBron was in the eastern conference and Steph was in the western conference hence they never got a chance to share the court in an all-star game. However, when they finally did, the NBA changed the rules to stop that from happening. Team Steph and Team LeBron went head to head in 2018, and Steph was drafted by Giannis Antetokounmpo in 2019.

For the first time in their respective careers, LeBron James and Stephen Curry played together on the same team. LeBron looked amazed at every half-court shot curry took during the game last night and cheered him throughout.

Finally got to share the floor with @StephenCurry30! Well overdue and I loved every single second!! #GreatestShooterOfAllTime #ChangedHowTheGameIsPlayedByHimselfAlone #RespectBeyondWords #JustSomeKidsBornInAKRON🤴🏾

Postgame, King James took to Twitter to acknowledge the fact that sharing court with Stephen Curry was long overdue. He expressed his gratitude by calling chef Curry the greatest shooter of all time and implied that he changed the game all by himself.

His LA Lakers teammate Anthony Davis was impressed by Steph’s range in the 3-point contest and called him a ‘cheat code’ on Twitter.

This man @StephenCurry30 is a cheat code bruh!!

Stephen Curry received most fan votes for Kia All-Star MVP however, Giannis Antetokounmpo was favoured by media and analysts.