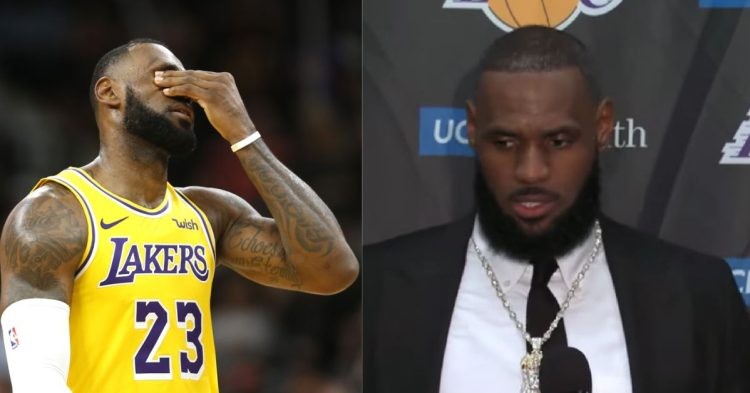 LeBron James in a suit and on the court (Credit: YouTube)

Los Angeles Lakers superstar LeBron James has been relevant to both the NBA and the sports world for a long time now. He is a man who does not shy away from speaking his thoughts. Along with other players James recently shared an Instagram post sharing condolences and respect for the passing of American Rapper Takeoff. In fact, he even changed his profile picture to display the rapper.

To those who do not know, Takeoff was shot and killed in a bowling alley in Houston. There is clearly nothing wrong with paying homage. However, some of the statements made by LeBron have led NBA fans to call him out and question their legitimacy. We should take a look at what James said and how the fans reacted in order to get a better understanding of the situation.

In the modern world, there is a phrase, “calling cap”. It refers to a situation in which someone says something that is simply unrealistic and unlikely. That results in the audience “calling cap” over what was being portrayed.

This is exactly what has happened. It is difficult to deny the facts in this situation as well. LeBron was asked about his outfit and his desire to honor Takeoff. However, he ended up saying something that was simply not factually accurate.

Their first mixtape came out in August 2011 pic.twitter.com/JkIlY7U6Vc

“I mean for me, I’ve been listening to those guys for so long. I was listening to those guys my first year with the Heat in 2010. And you can ask anyone of my teammates back then, they had no idea what Migos was. They were cursing me out when I would play it throughout the weight room or play it throughout the locker room. I was like I’m telling you these guys are next. They was like turn this off I don’t wanna hear this.”

It is certainly possible that the King’s teammates had a problem with the kind of music he was playing. However, as NBA fans were quick to point out, Takeoff’s first album didn’t release until 2011. LeBron specifically said 2010 when discussing the first time he listened to their songs.
Tags: LeBron JamesNBA
Previous Post