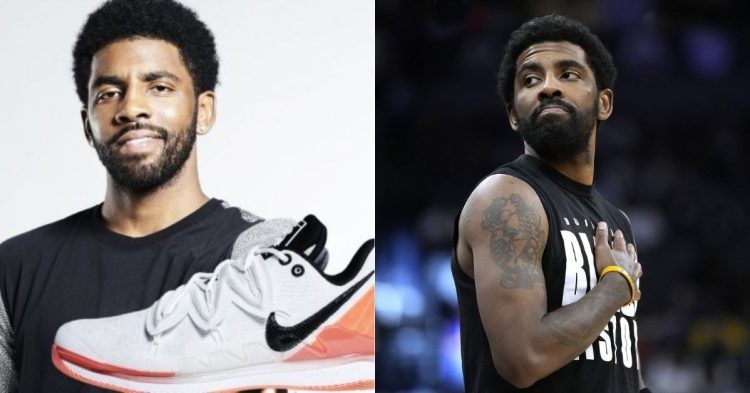 Kyrie Irving has been involved in plenty of controversies since joining the NBA. One of the first things to come to our minds will be his refusal to get a vaccination in the middle of a pandemic. Kyrie did not stop there. He got involved in yet another drama this year when he posted the link to a movie with anti-Semitic remarks in it on Twitter. This landed Irving in hot water, with the Brooklyn Nets and the NBA as well.

The Brooklyn Nets suspended Kyrie for his decision to post the link to the movie. Together with that, he received warnings from owner Joe Tsai and NBA commissioner Adam Silver as well. This was when Kyrie decided to apologize to the world, after refusing to do so for quite some time. Despite this, he got the Kanye West treatment from Nike, who chose to suspend their contract with the NBA star.

Nike has announced it is suspending its relationship with Kyrie Irving “effectively immediately” and will not launch the new Kyrie 8 pic.twitter.com/Pr6lA7enl3

At the time, it meant that Nike will be just suspending their contract with the player, and not terminating it. It remained suspended until very recently. According to Shams Charania, Nike has decided to officially end their relationship with Irving.

Kyrie Irving is no longer a Nike athlete, Nike spokesperson says. The sides have parted ways one month after Nike suspended its relationship with the Nets star. Irving has one of most popular signatures shoes in the NBA and is now a sneaker free agent.

The decision to let him go in such a way has not gone down well with NBA fans. Many have taken a stance against the American company and have taken serious shots at them.

It is no secret that fans have criticized Nike for its ties with China. Many believe that the company should display morals to some extent before taking shots at Kyrie. A fan replied, “Did Nike cut its ties with China?” to a news tweet that mentioned that Nike cut ties with Kyrie.

Did Nike cut its ties with China and the slave labor?

Nike execs knowing their shoes are made through child labor pic.twitter.com/s1tuq2Lvqa

Ahh yes Nike, the beacon of right and morality

Won’t hear about the way their shoes are made tho, Nike is and always will be corrupt

Nike is a walking L.

Fans seem to be unhappy with the fact that Nike cut ties for Kyrie’s “anti-Semitic views”.  A while ago, co-founder Phil Knight mentioned that the Nets star went over the line, causing the brand to suspend their relationship with him. However, fans, on the other hand, believe that if Nike is deciding to be moral, it should apply to every aspect too.

We all know that NBA fans have been pretty vocal about how they feel when it comes to the NBA’s ties with China. That includes LeBron James too. Many believe that King James goes silent only when it comes to matters regarding China. Together with that, some even speculate that the 4x NBA champion has even received hush money to not raise his voice.

It seems like fans have treated the Nike-Kyrie issue the same as well. They accuse Nike of being hypocrites for not following the same morals that they want their athletes to follow. It will be quite intriguing to see who Kyrie signs with next, especially since his signature shoe line is one of the most popular in the game right now.