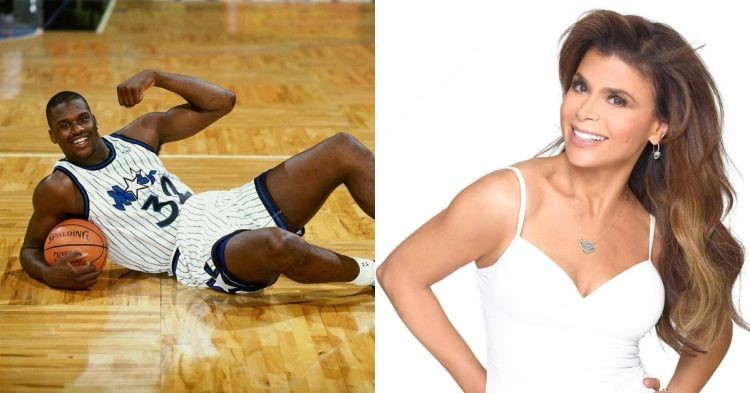 Shaquille O’Neal has been a part of the NBA for as long as people can remember. He is widely regarded as the greatest center of all time. Shaq rose to fame first with the Orlando Magic. During his stint with the Magic, he dominated the floor with his sheer size, athleticism, and defensive instincts.

How are Shaq’s pants too long in this extremely 90s photo of him with Paula Abdul. Like, how did Shaq go shopping and pick pants off the rack that were just simply too long for his legs. pic.twitter.com/Y1kuzZEHN5

He then moved on to play with Kobe Bryant and the Los Angeles Lakers and led them to the last three-peat in the NBA. Shaq then won his 4th and final ring with Dwayne Wade and the Miami Heat. During his time with the Lakers Shaq accumulated a mountain of wealth. In one instance he brought a house just because it was right next to Lakers’ cheerleader Paula Abdul.

What is the relationship between Shaquille O’Neal and Paula Abdul?

Back when Shaq was looking for a place to stay in LA he took a tour of a house that he didn’t really like, but being as wealthy as he is Shaq decided to buy the house solely because former Lakers’ cheerleader Paula Abdul lived right across the street.

Here’s what he had to say about the purchase. “True, So true, like I was here and I didn’t really like the house and he was like Paula Abdul lives here (next door) I said Who? he said Paula Abdul and I said ill take it”

And that’s all there was to it. Shaquille O’Neal, one of the most successful NBA players bought a house to live next to Paula Abdul. Shaq even went on to explain how he accidentally ran into Paula all the time. Here’s what he had to say “She’s a very nice lady have I ever dated her or flirted with her? No, I just moved right across the street. Every time I looked and she came outside I would accidentally come outside and go oh hey Paula, how are you?”

Let’s have a look at who Paula Abdul really is.

Who is Paula Abdul?

Paula Abdul is an American actress, singer, and TV personality, back in the 90s she was one of the most beautiful and influential black women. Even rappers from this generation like J Cole use her songs as samples sometimes. One example of this was J Cole sampling, The New Workout Plan” by Kanye West and “Straight Up” by Paula Abdul on his song “Work Out”

Imagine having @SHAQ as your neighbor 🤣

Paula Abdul used to live next door to Diesel himself and shared some of Shaq’s secrets on #TheBigPodcast: https://t.co/XO3hO3abC9 pic.twitter.com/uQt2oCYioj

Paula Abdul is truly an influential figure in the community and these feats are just examples that go on to add to her legend.