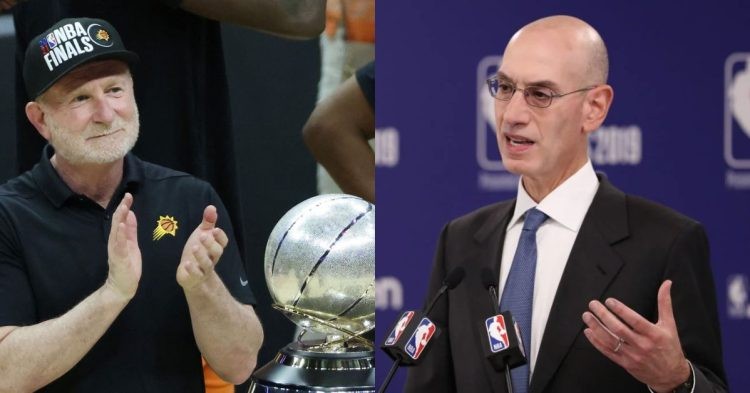 The owner of the Phoneix Suns, Robert Sarver has been accused of workplace misconduct. There were several people who claimed that he made racist and sexist comments multiple times. Thus, the NBA decided to conduct an in-depth investigation and concluded that the claims against Sarver are valid.

Adam Silver is the current NBA commissioner and the league’s face as a business and organization. He is known for his sense of ethics and principles. He released a statement following the decision to fine and suspend Sarver for a year. One must wonder whether he sided with the owner or decided to speak out against a fellow partner in light of these events.

It would not surprise many if Sarver was on his best behavior around the league’s commissioner. Even NBA superstars like Kevin Durant are on good terms with the commissioner Thus, Silver initially found it hard to believe one of his business partners would engage in behavior of this manner. However, as the evidence piled up, he had no choice but to accept it to be true.

“I was in disbelief to a certain extent about what I learned… I was saddened by it, disheartened. The conduct is indefensible. But I feel we dealt with it in a fair manner”.

The NBA commissioner was then asked why Sarver was not being permanently removed as an owner and fired. He explained the complications and intricacies involved in following through with that idea.

“There’s no neat answer here… I don’t have the right to take away his team. I don’t want to rest on that legal point because of course there could be a process to take away someone’s team in the league. It’s very involved, and I ultimately made the decision that it didn’t rise to that level.”

We should certainly be able to understand where the NBA commissioner is coming from. What Robert Sarver did to his employees may be illegal and simply wrong. However, firing an owner means a lot of change in management. Thus, other people could potentially lose their jobs due to Robert’s discrepancies.

We can conclude this ran through Adam Silver’s mind when he added, ” I have access to information that the public doesn’t.” We hope he is able to deal with it and see to it that this situation is soon put to rest.

“Second Round Drag Him to Deep Waters”- Islam Makhachev Reveals Exactly How He Will Beat Charles Oliveira, Predicts a 3rd Round Win