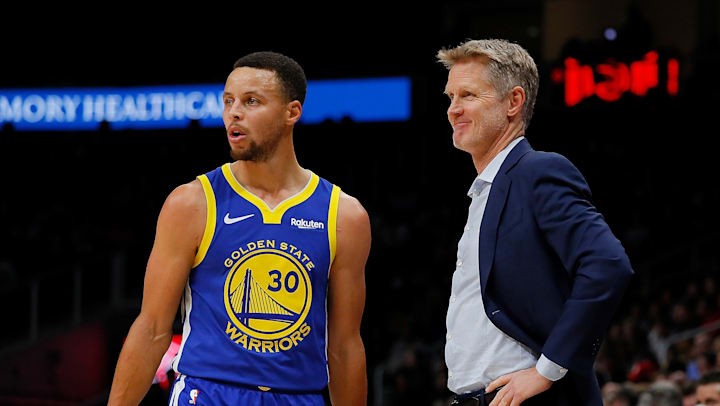 Stephen Curry destroyed the record books last night in the 2022 All-Star game. He scored 50 points whilst winning the game for Team LeBron. He also picked up the new and fancy-looking Kobe Bryant All-Star MVP trophy. And to top it all off, he broke Paul George‘s record of most 3 pointers made in a single All-star game with 16.

After a huge performance like this, Curry would be excited to get back to the Bay area and continue their grind to the top of the NBA. However, instead of boosting morale, Stephen Curry decided to take a dig at his coach.

Stephen Curry has a message for his head coach Steve Kerr

After his huge all-star game performance, Stephen Curry said this.

Stephen Curry on his 50 points performance: “That’s what happened when you don’t take me out when I’m hot”.

Stephen Curry took the most subtle shot at Steve Kerr. There have been games this season where Stephen Curry has been lighting up the box score and demolishing teams to a point where it is not competitive anymore. It’s a very common thing for coaches to then bench their stars to preserve them from a potential injury.

We saw that last season and the season before with Giannis Antetokounmpo where he’d sit out a huge chunk of games because by that time it was already a blowout. This practice came more into play after D-Rose first got injured. Rose had no reason to be in the game but Tom Thibodeau always overworks his stars. And that mistake completely derailed the career of the youngest MVP of all time.

Steph subconsciously knows this too. And in comparison to his MVP level season last year, the average minutes per game this season is higher. However, Curry loves breaking records and he could’ve broken a lot more if he was on the court and is now, therefore, showing resentment to Kerr.

Will this comment affect the relationship between Kerr and Curry? We will find that out when the Warriors return after the all-star break.