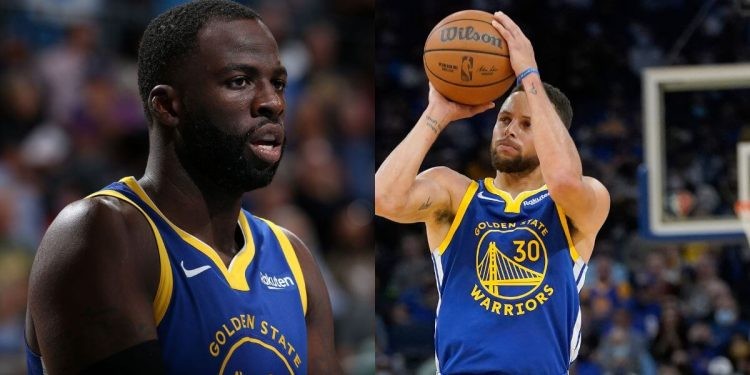 Draymond Green, Stephen Curry, and the Golden State Warriors are one win away from their 4th NBA title in recent history. They look to eliminate Jayson Tatum and the Boston Celtics in Game 6.

Curry had a much more quiet performance in Game 5 in comparison to game 4. He ended his streak of 238 consecutive games with at least one three-pointer. Draymond responded to this performance following them winning Game 5.

The series has taken a dramatic shift since the Celtics took a 2-1 lead. Steph led the Golden State Warriors to a 107-97 win scoring a monster 43 points, 10 rebounds, and 4 assists in Game 4. He followed this up with only 16 points 8 assists and 4 rebounds. Moreover, he did not make a single three-pointer in his 9 attempts.

Chef Curry is the best shooter the world has ever seen. Additionally, he has proven to be a force unlike no other this postseason. However, with that being said, how he “feels” and whether he gets “good looks” or “If the shot is falling” are all variables that differ every game. It is unfair to expect him to always be able to impact the game with his pure outside scoring. Especially, if all the above-mentioned factors are working against him.

Draymond explained in his own words how he does not expect this to happen, on his podcast, it was interesting to hear what he had to say about Steph’s struggles in Game 5.

“A- the Boston Celtics defense did a good job… we have to get give their defense credit we know their defense is as advertised…but what that says to me is Game 6 I feel like he’s just gotta be due for an explosion because he didn’t make a shot tonight and when does Steph Curry not make a shot…I know the response I am expecting.”

The former defensive player of the year certainly had high expectations of the unanimous MVP following a somewhat quiet performance in game 5. Green also went on to explain how Curry still helped the Warriors’ offense even without his 3-point shot “falling“.

“Nonetheless, he was still extremely important to our game obviously our offense stops and goes with Stephen Curry… the gravity that he pulls… the impact was still felt but still controlled the entire pace of the game for us controlling the tempo even tho he was hitting the shots.”

This is something Curry has been for the majority of his career. Therefore, the Warriors’ stars are able to get good looks with him on the court.