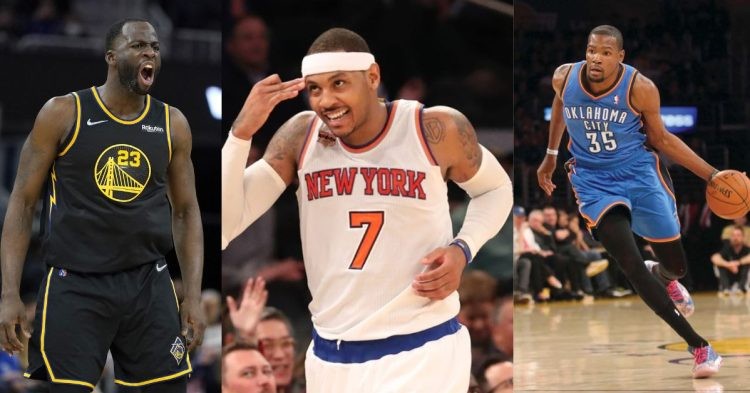 Draymond Green always takes things too far. He is a 4x NBA champion and helped the Warriors win the 2022 NBA championship. “The Draymond Green show” is a podcast that talks about things NBA-related. He said something on an episode that could be considered quite controversial, if not downright wrong.

The Golden State Warriors’ defensive anchor claims that Carmelo Anthony can be considered better than Kevin Durant. We all know KD and Draymond and former teammates. One must wonder if this influenced his decision in taking this stance. Moreover, it is important to understand whether Draymond was simply “hating” on KD and whether there are legitimate reasons behind his stance.

Draymond has been quite critical of the present-day media. Thus, it is shocking for him to take such a disputable stance. Unless he is looking for those same “hot takes” clicks that he accused the media of doing. Now Carmelo Anthony is a very good NBA player. But almost every NBA analyst knows he does not hold a candle to Kevin Durant. Nonetheless Green decided to defend his opinion.

“Golly that’s crazy. I’m going to go with Melo and the reason I’m going to go with Mello is that I grew up watching Melo score the basketball. Like I grew up Melo came to the league in 03… I was 13 years old I grew up watching Melo get a bucket however he wanted it. You wanted mid-post work first step crazy, you wanted straight block work, fadeaway tuff, and Melo will bully the hell out of somebody. You want the trey ball we all know he can do that and he’s just a three-point shooter for the USA team…”

Draymond also went on to explain how Melo got foul calls and this influenced Green’s decision to choose Anthony over KD. How much truth is there to Melo’s ability in getting “a bucket however he wanted it“.

Green claims he chose Melo also because he saw him play several years ago. Perhaps, he does not want to admit that his former teammate is a greater player than someone Green once looked up to. This could be another reason why he took this stance.