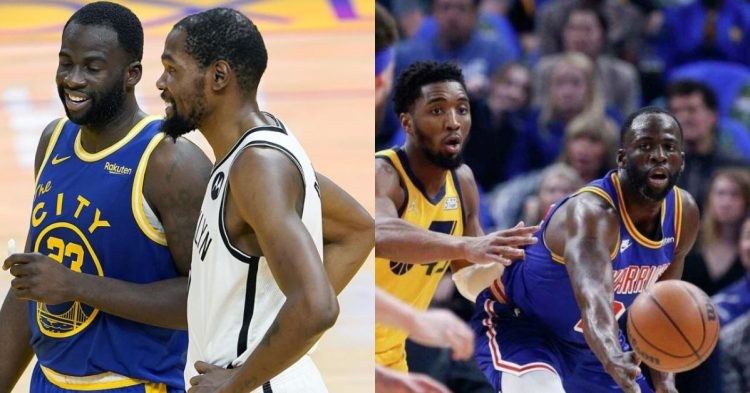 Draymond Green has quite a packed offseason. Despite his NBA career, he conducts a podcast called  “ The Draymond Green show“, where he discusses several NBA issues from the perspective of the player. Moreover, he has gone on to define player-focused podcasts as the “New Media” and criticizes other analysts for their controversial statements and “hot takes“.

Kevin Durant has requested a trade from the Brooklyn Nets. As a result, the same analysts seem full of the same hot takes regarding his future destination. Another NBA star currently involved in trade talks is Donovan Mitchell of the Utah Jazz. Therefore, Draymond decided to address the trade rumors behind both these NBA stars and why it will take time.

“Player empowerment” has allowed NBA superstars to force their ways out of unfavorable teams and situations. Moreover, in some cases, the player does not even finish his signed contract and demands a trade midway through it. This is exactly what Kevin Durant has done. He signed a contract extension for 4 years and $198 million just last year in 2021. However, just a year later, he does not seem to want to ride this contract out with the Nets and looks to be moved to another team.

Donovan Mitchell is much younger than Durant. He signed a 5 year $168 million deal with the Utah Jazz in 2020. He has 4 years remaining on his deal. However, the Jazz traded away his star teammate Rudy Gobert and either look to move him too. Or perhaps look to build a new roster around him. In either case, Mitchell is also quite likely to be traded at some point. Draymond explained why both these players’ respective franchises are taking time to move them.

“We’ll see what happens whether he(KD)  gets traded or not, where he’ll get traded. But I’m telling you trading a Donovan Mitchell, trading a Kevin Durant that’s not something you wake up tomorrow like boop that’s done. Those things take a while when you’re trading that level of talent… You wanna hear everything you wanna make sure you get the absolute most you can get for a level of talent like those guys so well see what happens with that.”

For a player who does not need to understand the process behind franchise business dealings, Draymond is quite spot on. Whether a superstar is unhappy or not, the team must look for the best deal possible in the event of a trade in order to remain competitive.