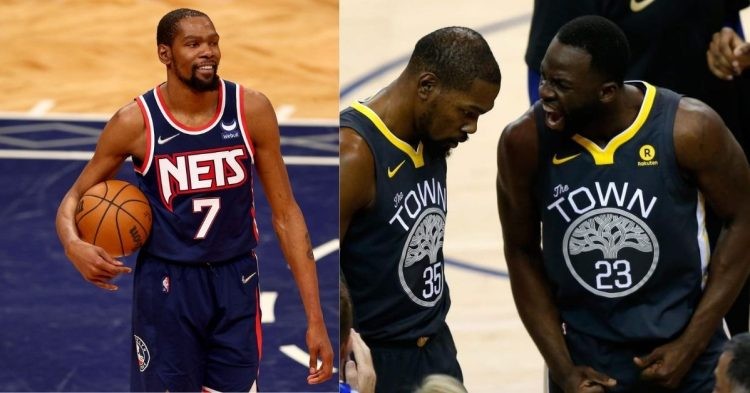 A while ago, Kevin Durant took the world by storm when he requested a trade to leave the Brooklyn Nets. As everyone knows, it was quite unusual considering the fact that Kyrie Irving chose to stay. Although it has been a while, there have not been many developments in the situation. This has led to people asking the question; does KD really want to leave? Is he doing this just to scare the Nets board?

Many have criticized KD for being problematic, dramatic, only wanting to play in a super team, and much more. In the middle of this, Durant has received support from a Warriors player. Draymond Green spoke about the Nets star’s situation and included a wider perspective that people should know.

The Warriors star had his say on a podcast episode. He said, “If Kevin Durant says, I actually don’t wanna be here anymore, I wanna go to somewhere else, why does it matter? Why does that make you weak? Why does that make him – means he’s running from something?”

DG’s comments may be true to an extent. In the past, KD has decided that he doesn’t want to play for a team anymore and wants a new change. Moreover, every player has a point in their career where they decide they should not play for a particular team anymore. The only difference between them and Durant is that he’s more open about it.

DG’s comments may be true to an extent. In the past, KD has decided that he doesn’t want to play for a team anymore, wanting a change. Moreover, every player has a point in their career where they decide they should not play for a team anymore. The only difference between them and Durant is that he’s more open about it.

Draymond also spoke about the general problem that athletes face. He mentioned “If someone leaves Google to go to Apple after three or four years, and then they leave Apple after two years to go to Tesla… No one is going to say that person ran.” As DG mentioned, this standard does not exist for athletes, as they are called out for not sticking with the team, even when they want to take a step forward.

He continued, “everyone’s going to say that the person did what was best for their career and best for their livelihoods. But us as athletes, it’s never viewed that way. And it’s baffling to me that it’s never viewed that way because our life spanning with this career is actually way shorter than someone that’s working at Google, working at Apple, or anyone else in the world for that matter that’s not an athlete.”

Although Draymond Green is right about the unfair treatment that athletes receive. There are other things that you have to account for as well. The main reason why critics have done their job in with KD is that he signed a long-term contract. His contract means the Nets will still expect him to turn up for the team. There wouldn’t have been a problem if KD chose to leave when he didn’t sign a contract with the Nets.