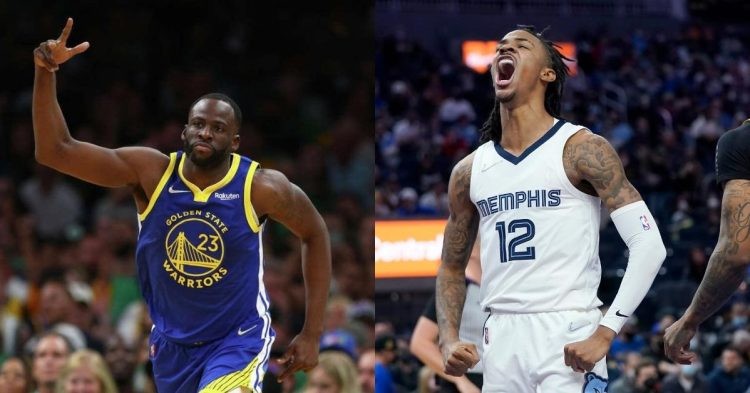 Draymond Green and The Golden State Warriors beat the Boston Celtics to take home their 4th ring in 8 years. In the post-game presser, Klay Thompson talked about a certain tweet that offended him. Back when the Grizzlies eliminated the Warriors from the play-in back in March 2021, Jaren Jackson Jr. took to Twitter and mocked the Warriors’ motto of “Strength In Numbers”. This stuck with Klay and he brought it up a year later after winning his 4th championship.

“It’s a collective effort. Strength in numbers is alive and well.”

“It pissed me off so much. I can’t wait to retweet that thing. Freakin’ bum.” This is what Klay had to say about Jaren Jackson Jr’s tweet.

We traded that real estate in @JaMorant the property value was higher in Boston https://t.co/X7Du6zSiZF

This is what Draymond had to say about Ja’s comment on a lot of real estate inside Klay Thompson’s mind. Morant is well known for his athleticism but recently he’s also been making a name for himself on Twitter. It appears that when he’s not hooping, he’s on Twitter making comments about his rivals.

Ja Morant had this to say when a fan suggested that Warriors vs Grizzlies is a guaranteed Christmas matchup. This clearly rubbed Draymond the wrong way and he clapped back with a tweet of his own.

Warriors v Grizzlies has been one of the most entertaining matchups in recent years. The rivalry began when Memphis Grizzlies eliminated Golden State Warriors from the play-in tournament, then at this year’s play-off the Warriors eliminated the Grizzlies in round 2 of the playoffs and then went on to win the Championship.

The Grizzlies are a very young squad and on the other hand, the Warriors’ championship core of Stephen Curry, Draymond, and Klay Thompson is in the later parts of their careers. It’ll be interesting to see how this rivalry plays out and most NBA fans would love to see a Warriors vs Grizzlies match-up for Christmas later this year. Who do you think gets the last laugh?