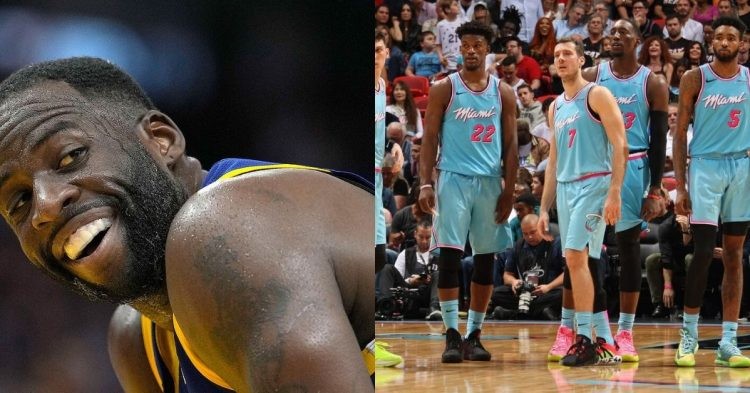 Draymond Green, Stephen Curry, and the Golden State Warriors were the first team to make the NBA Finals. The Miami Heat vs Boston Celtics series was at a climax and Green was asked for his opinion on the outcome of the matchup.

The reporters asked Draymond which team he would prefer to face between Miami and Boston. Green instead gave them his prediction for the Finals matchup,

“I know who we’re gonna play and that’s Boston“.

This sparked controversy as the series was not over. Additionally, the Miami Heat won game 6. However, they were unable to close out the series at home and made Green’s prediction come true.

It is not prudent to make a guaranteed prediction about one’s opponent. However, Draymond was pressured into answering the question in the first place ” which team is a favorable matchup?” will definitely create a controversial response.

Draymond chooses to try to avoid that by answering the question in apparent practical reality. That is the notion of “This is who I’m facing and that is all that matters“.

Miami Heat veteran Udonis Haslem took offense at Green’s comments and claimed that he “broke the code“. This actually gained momentum after the Heat won game 6 on the road to avoid elimination.

The Heat was eliminated in game 7, although Tyler Herro was injured for the majority of this series. Therefore, Draymond’s words came true. Draymond was asked about the reactions from the Heat players. He mocked the notion that they needed motivation from him. Green’s exact words were the following.

“It was exciting to know that people pay that much attention to my words and what I say… I’m getting better at this motivational thing, that’s great“.

The Heat won game 6 behind Jimmy Butler. Additionally, they forced a Game 7 when the series was considered over. However, we do not know if Draymond’s words inspired Jimmy or the Heat in game 6.

The Miami Heat lost game 7. However, if they won, Green would be caught in the media crossfire. Therefore, he should certainly be thankful that this prediction didn’t go wrong.