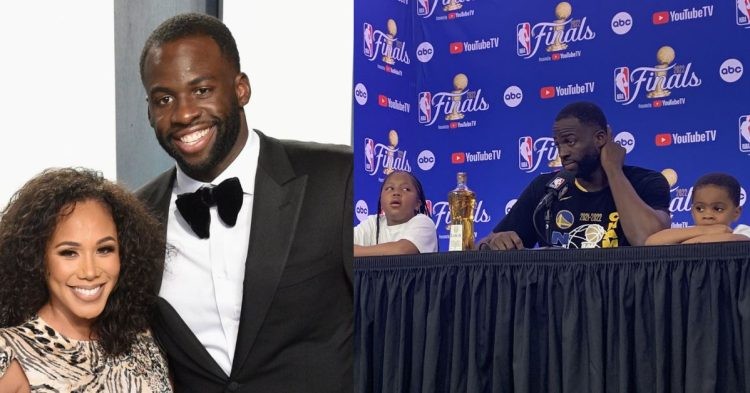 Draymond Green is one of the best players for the biggest team in the world; the Golden State Warriors. He has been vital to the team’s success in the past years. The GSW won its first title after 40 years in 2015. No one expected that it would mark the start of a dynasty. Since then, they have won 4 NBA Championships. The most recent title win was this year, against the Boston Celtics, who fell in six games.

DG has been at the center of all this, literally. Together with Steph Curry and Klay Thompson, he is part of a formidable trio. Every team is known to fear the three for their chemistry and ability to unlock each other’s talents.

Just like how he has a strong family on the court, he has the same off it as well. Let’s take a look at his family and kids.

Who is Draymond Green engaged to?

It is official that Hazel Renee is DG’s fiancé. She is an American actress and TV personality. It was in 2003 when she started her career when she acted in a webisode called The Marriage Tour. One of her more famous shows includes The Empire which she appeared in Season 3.

Draymond popped the question to Hazel Renee in 2019. Hazel shared the engagement news to the world on her Instagram page then. DG proved that he wanted to show his significant other the best time in the way he proposed.

It included a helicopter ride to a yacht with the couple’s family members. It was then Green proposed to Hazel. Although there isn’t an exact figure, her estimated net worth is to be at about $1-2 million dollars.

Renee has also been in the headlines, just like her fiancé. Recently, she reacted to the Celtics fans when they mocked Draymond. During the 2022 NBA Finals, Boston won Game 3. After that, their fans chose to have a go at DG and call him names that no one would want to hear. Renee went on Instagram to respond to the fans that insulted her husband.

Draymond Green’s wife, Hazel Renee, took to Instagram to call out Celtics fans for their ‘F**k you Draymond’ chants as well as calling him a ‘b**ch’ and a ‘motherf**ker’ in front of her kids. pic.twitter.com/v3E7kajQDL

We can agree that DG didn’t have a good game back then, but for the fans to do what they did is truly unacceptable. It is wholesome for everyone to see that Renee has Draymond’s back, especially when it is needed the most.

Draymond Green became a father for the first time in 2014. His ex-girlfriend, Jelissa Hardy gave birth to Kyla Green. Although Kyla’s mother’s current situation is unknown, reports say that she was in a relationship with Draymond during the beginning stages of his career.

Fans spotted Kyla with Hazel earlier this year at a game supporting the man they love. After the game, DG celebrated the win with Hazel and Kyla.

After Kyla’s birth, it is said that DG became more responsible and careful about how he wanted to portray himself. We all can agree on the fact that fatherhood is one of the most important things in life, and you have to cherish it, just like Draymond is doing.

Draymond Green also has a son, named Draymond Green Jr. He is the first child that DG and Hazel gave birth to together. Moreover, Dray Jr has made a name for himself over the years. He also has become one of the most famous kids of NBA stars.

Cameras have spotted the young kid doing his part in helping the Warriors players. DJ assisted Steph Curry when he passed on a mask as the chef was sitting on the bench. If that wasn’t enough, he also helped Klay get a shooting shirt.

Draymond Green’s son helping out his dad’s teammates on the bench is too cute 😂❤️ pic.twitter.com/zfMDSuUeWA

That’s not the only time DJ has featured in the headlines for doing something adorable. Earlier this year, he did something that caught the eye of the audience.

He had a cute request for his dad after DG scared him during an interview. If that wasn’t adorable enough, he played hide-and-seek with one of the journalists as DG answered questions during the press conference.

As we saw DJ having fun, we can also see a lot of Draymond Green in him. The four-time NBA Champ has always made sure he enjoyed his game and the time he spends with his loved ones.

Similarly, his son also has the quality in him as he tends to ease serious situations around him. Adding on, reports also say that Draymond welcomed another daughter this year with Hazel Renee. The couple has kept the details about her in wraps.