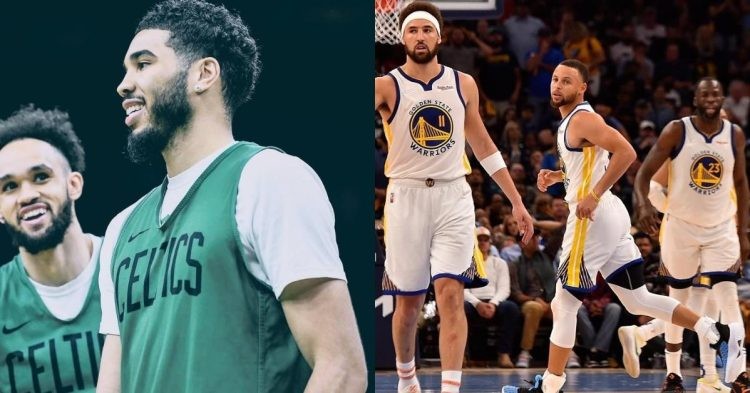 The Golden State Warriors suited up against the Boston Celtics for Game 5 of the NBA finals on Monday. The Warriors came out on top and took a 3-2 series lead. Andrew Wiggins and Klay Thompson came up huge to pick up the slack behind Curry who was having an off night on Monday.

This series has been a rollercoaster ride. We have seen it all from multiple lead changes to ties and historic performances. After game 5, NBA players reacted to the series by tweeting their thoughts out.

Some players like Trae Young and Jamal Crawford took to Twitter and expressed their excitement for game 6 Klay.

I feel like Klay going for 50 in Game 6 , he just getting warm right now.

Others like Swaggy P and Ron Artest instigated some drama after they accused the refs of cheating and being unfair.

Well, aside from the drama some players like Zach Lavine and Kyle Kuzma came out and showed support for Andrew Wiggins who put up 26 and 13 to take a 3-2 lead over the Celtics.

Game 5 was an exciting watch. The Celtics exploded onto the court in the 3rd quarter and put up 35 points compared to the 39 that they had in the first half. They could’ve stolen game 5 on Warrior’s home ground if it wasn’t for the horrible short selection and decision-making that led to a ton of turnovers.

The Celtics just can’t seem to get a bucket in the clutch. During game 5 we saw Jayson Tatum shoot efficiently through the first three quarters. Then the 4th came along and he started shooting airballs for some reason.

The Celtics need to make some kind of change to minimize all these turnovers and poor shots in the fourth. The series may look closely contested but if you pay attention you’ll notice that the Celtics’ offense is often stagnant while their top scoring options try and play “Heroball”. Something has to change if the Celtics want to claim this title for themselves.

On the other hand, if the Golden State Warriors can stay healthy and keep up their performance then this series just might end in 6 games. The outcome of these finals will ultimately come down to who plays better in the 4th.