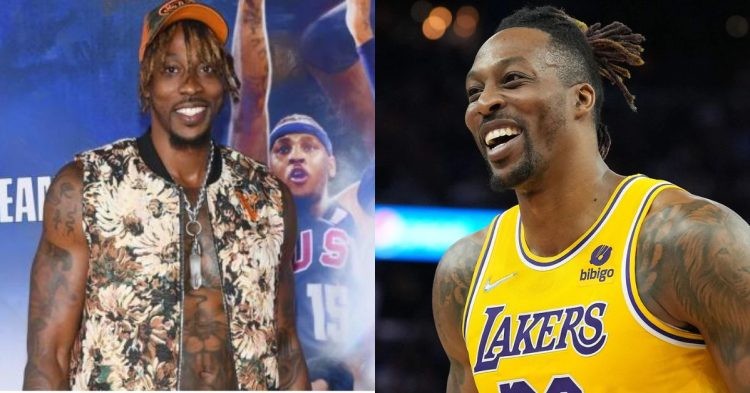 Dwight Howard in casual clothes and on the court (Credit: Twitter)

Dwight Howard is a highly accomplished NBA center. He is an 8-time all-star, and 5-time All defensive team member, and even won the defensive player of the year award thrice in his career. He is also an NBA champion with the 2020 LeBron James-led Los Angeles Lakers.

Despite having an illustrious career, his playing days in the NBA are over. After all, he is 36 years old and was a part of the 2004 draft class. We already know that Howard has shown an inclination toward pursuing a career in WWE if he is unable to play professional basketball.

With that being said, one might wonder what the former NBA star is doing and what his plans for the future are. Let us take a look at the latest information on this.

Dwight averaged 15 points and 12 rebounds throughout his NBA career. However, it seems that no NBA team has an interest in signing him at this juncture in his career. In his final year playing in the league, Howard averaged 6.2 points and 5.9 rebounds. Moreover, this was coming off the bench for the Los Angeles Lakers.

The NBA is a league that is always moving forward and veterans are given a crude and abrupt exit at times. Another veteran from the Los Angeles Lakers who have been removed is Carmello Anthony.

In any case, Dwight Howard will now be taking his talents to china and playing for a Taiwanese team called the Taoyuan Leopards. They compete in a league called the “T 1 League“. NBA fans might be curious as to why such a talented athlete has no place in the league.

Dwight Howard has signed to play with the Taoyuan Leopards in Taiwan, he announced on social media.

There is no simple answer to this. Dwight is a veteran with pride and still has some value on the court. However, modern basketball heavily emphasizes perimeter play. Dwight might still be a tremendous rebounder. Be that as it may, he never really develops his perimeter play. Moreover, his free throws were also subpar by NBA standards.

To those who are interested, He shot 21.4% from the three-point line and 56.7% from the free throw lines. These are the only statistics required to understand why no team decided to sign him for a few more years.

There were several reasons for us to believe that Dwight would try his hand at WWE if his NBA career came to an end. In fact, he even auditioned for a role and has met with several wrestling stars. Nonetheless, he has decided to continue playing basketball overseas.

WWE fans should not be dismayed by this. As already mentioned, he is only 36 years old. Therefore, it is highly possible that he still pursue WWE after his overseas career comes to an end. However, we should not expect that to end anytime soon as Dwight Howard still has a lot of basketball left in him.
Tags: Dwight HowardNBAWWE
Previous Post