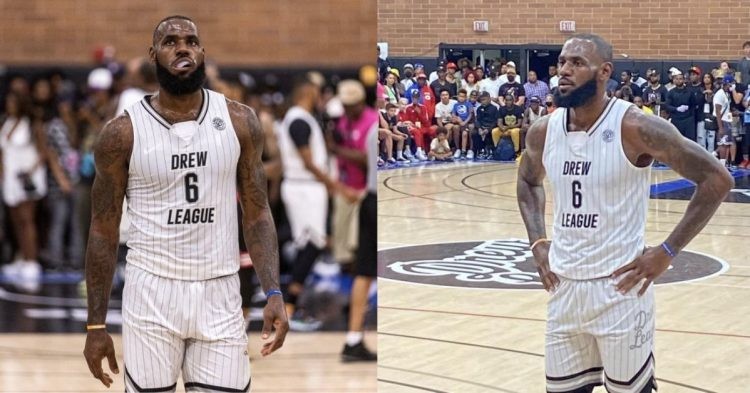 The Drew League commenced once again this summer once again in LA. The purpose of the league was to bring together talented individuals in the community. Adding on to that, it also became a platform where NBA players have chosen to play to simply just have a good time. One such star to play in the league was the all-time great LeBron James.

James has just come off from a disappointing season with the LA Lakers. This year, they missed the playoffs for the second time in a row. It makes one of the hardest points in the Lakers organization’s history. LeBron would have been gutted as he missed the last eight games for the Lakers. The reason for this was his left ankle injury. In total, he missed more than 25 games in the entire season for the Lakers.

He returned to the court to play in the Drew League for DeMar DeRozan‘s team.  The last time LeBron featured in the league was in 2011. That was when he finished a game with 33 points,10 assists, and 7 rebounds. This year, his team’s name was MMV Cheaters and they played against the Black Pearl Elite. The game did not disappoint and it ended 104-102 to the Cheaters as they won the nail-biting game.

King James ended the game with 42 points, 16 rebounds and 4 steals to his name. His performance proved why a large group of fans turned up to the court to watch him play. The King impressed Drew League commissioner Dino Smiley, who called the memorable event “an epic, epic afternoon of basketball,”.

The area was packed with people, which is more than the usual number in the audience. The crowd loved every shot LeBron took. It is not every day you get to see the GOAT balling out in front of you like it is nothing. It was almost as if he hadn’t been out due to injury. Other popular celebrities such as Warriors star Draymond Green and rapper Quavo also attended the game.

As a whole, the event was something that brought people together. The arena, which had a 1300 capacity, saw more than 2500 people in attendance. The love that LeBron brings out in people really shows the impact he has on basketball as a whole.