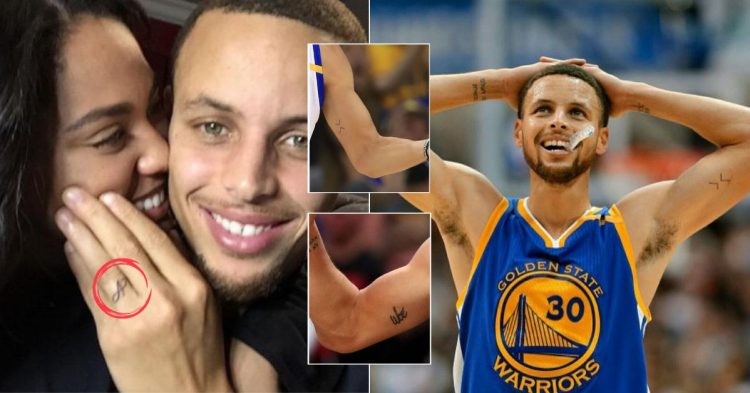 Tattoos are a big part of the NBA. It has become a way players depend on to express themselves in creative ways. There are many athletes in the league that choose to display different types of art on their bodies. One such individual will be Golden State Warriors star, Stephen Curry.

Many would be surprised to hear Steph’s name when tattoos are spoken of. The reason for that would be because his inks have been so subtle that many do not notice it.

The Chef’s tattoos have always been directly related to his family in one way or another. Adding on, the superstar has shown he had been always interested in inks. Reports say that Curry wrote a senior thesis on tattoos and how athletes decide to get their bodies inked. Let’s have a look at all the tattoos he has as of now and what they truly stand for.

What tattoos does Stephen Curry have and what do they mean?

Steph has proven the Hebrew language intrigues him with the number of tattoos he has in it. One of the most obvious ones would be the ones on his wrist. “קרי” – the tattoo translates to his family name, “Curry”. He got the tattoo after he won the 2017 title with GSW.

When the Baby Faced Assassin was at Davidson College, there was a certain individual that motivated him so much that he got a tattoo that will help him remember him for a long time to come. The ink on his left wrist shows “TCC 30”. TCC stands for Trust, Commitment, and Care. We all know what 30 stands for, it’s one of the most legendary numbers in the history of the league.

In addition to that, another tattoo Steph has would be a unique one, if they weren’t already. He has “><“ on his left bicep. The meaning wouldn’t be given away easily unless you know the verses of the Bible. It translates to “He must become greater; I must become less” from John 3:30. That is not the only tattoo he has with a deep meaning.

Once more, he has a wrist tattoo. It says, ” האהבה לא תבל לעולם אך”. The meaning of the tattoo is, “Love never fails”. He boasts another Hebrew tattoo as he took inspiration from 1 Corinthians 13:8.

It seems like he dedicated the tattoo to his wife, Ayesha Curry, who has a similar ink to Steph’s. Curry also has the letter “A” on his left ring finger. This would be another tribute to his wife, Ayesha. The Currys are really proving their love is inseparable.

Stephen Curry’s tattoo on his wrist is a line from First Corinthians- 13:8 in Hebrew (“Love never fails…”). pic.twitter.com/OecfwdzyCV

Another tattoo that Steph has would be on his right calf. I don’t need to tell you, it’s related to his family, which makes it so wholesome that Steph loves his family so much. The tattoo is of a Wolf, Butterfly & Unicorn logo. The butterfly represents their daughter Riley. The wolf and unicorn represent their children Canon and Ryan respectively. Just like the previous one, Ayesha also has the same type of tattoo.

Moreover, he also has ink that says “Woe” on his right bicep. It means “Working On Excellence”. It seems like the Warriors star has been vigorously working towards it as he is one of the best players on the planet right now. His recent season and the Finals MVP trophy are proof of that.