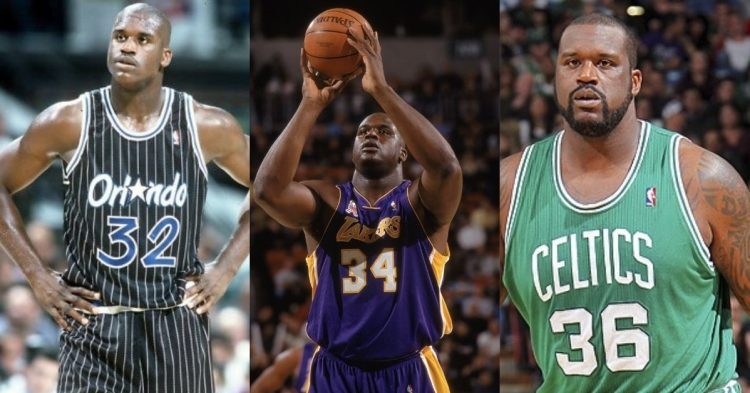 Shaquille O’Neal is the most dominant big man to ever play on an NBA court. Shaq has won it all on the court, he has an MVP, 4 Championships, and 3 Finals MVPs.

There are not many players who have a better resume than Shaq. Now, the crazy part about all of this is that despite being one of the best players of all time he switched teams pretty often and played for a total of 6 teams throughout his career.

We’ll get into the details of that later, but first, let’s have a look at how Shaq exploded onto the NBA stage and immediately started dominating grown men during his rookie year.

Shaquille O’Neal was a powerhouse from his rookie year

During his rookie year with the Magic Shaq put up some ridiculous figures. He averaged 23.4 points, 19.9 rebounds, and an outrageous 3.5 blocks per game to go with all of this he also broke a backboard. It didn’t surprise anyone at all when Shaq won Rookie of the Year.

Instead, players took it as a sign of arrival and acknowledged that he would be a force to be reckoned with for years to come.

28 YEARS AGO, Shaq won the Rookie of the Year award in dominating fashion 👊🏼

Shaq played some amazing basketball during his time with the Magic but none of this ever translated to the team succeeding as a whole. After his rookie contract with the Magic ended, Shaq signed a deal to play for the Lakers and the rest is history.

During his tenure with the Lakers, Shaq formed the best 1-2 punch along with guard Kobe Bryant. The two of them eventually led the Lakers to the first NBA Threepeat since Michael Jordan and the Bulls. But, things went sour between Kobe and Shaq after they lost the 2004 finals to the Detroit Pistons. As a result of this sour relationship, Shaq was traded to the Miami Heat.

Within 2 years of playing with Dwayne Wade and The Heat, Shaq won his 4th NBA Championship. Then as father time caught up with him, Shaq eventually lost a lot of his athleticism. Now, Shaq was a behemoth but his athleticism played a huge part in his dominant play style. After he started declining he was traded midseason to the Phoenix Suns.

Then after an 18-month stint with the Suns, Shaq was traded and suddenly found himself playing with LeBron and the Cleveland Cavaliers. After his contract ended, Shaq decided to play his last year out with the Celtics who were favorites to win the Championship during the 2010-11 season. But, much to Shaq’s disappointment that never came to be and he ended his career with one less ring than his rival at the time, Kobe Bryant.