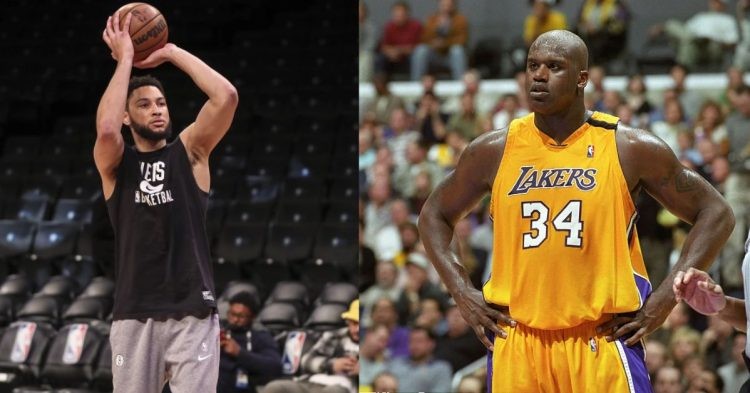 Brooklyn Nets star Ben Simmons and former NBA player Shaquille O’Neal had quite an interesting interaction. Most of us are already familiar with Simmons and his struggles to shoot the ball. He was considered a liability on offense as a result. Ben recently claimed that he reached out to Shaquille O’Neal about his struggles but the 4x NBA champion has yet to back off.

“He always wants to say were LSU brothers, this and that. If you’re my LSU brother you would have reached out by now.”

We should wonder if Shaquille O’Neal really “hated on Simmons“. Moreover, Shaq decided to respond to what the Brooklyn Nets star said. It is important to understand what he said in order to have a better grasp of the situation between the two.

This is quite a complicated situation for anyone to be in. Mental health advocacy is the mood of the day and people are seeming to be given due consideration for their actions. However, at the end of the day, Simmons is an NBA player and Shaq is now an ESPN analyst.

Thus, it is literally O’Neal’s job to share his input on players in the league. Whether they like it or not. Moreover, Shaq also revealed how he truly feels about Ben Simmon’s mental health situation.

“First of all, these young players need to understand, Shaquille O’Neal don’t need to hate on you. Everything you do, I’ve done a 100 times over… It’s just what we see. The mental health thing ain’t come out till everyone started bashing you then you let people know you have mental health problems.”

O’Neal went on to chastise Simmons further, “ It was never a personal attack on you. I just say what I saw. I saw in his eyes he was scared… And guess what? Everybody goes through struggles, we all do. This is the game we play, this is the life we live, you’re going to take criticism, they pay us a lot of money, somehow you have to deal with it.”

Quote an appropriate response from the NBA legend. He did not apologize or backtrack when Simmons called him out publicly. Instead, Shaq stood firm in his beliefs and shared them with us. We are free to decide who is in the wrong here. and who took things too far?