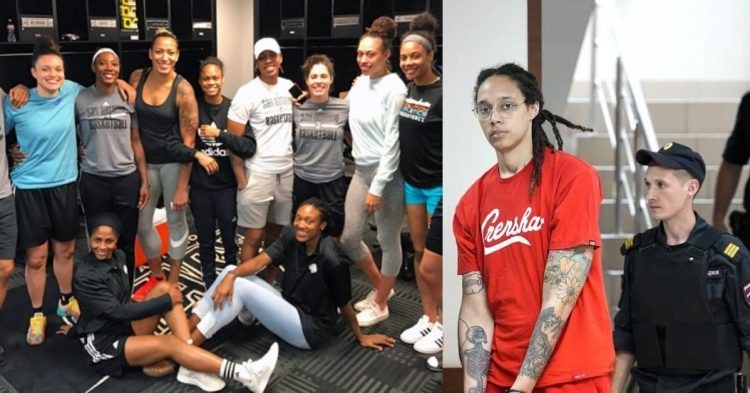 WNBA players in a group and Brittney Griner during her arrest before being moved to a Russian Penal Colony (Credit: Twitter)

It appears that WNBA star Brittney Griner has been moved to a Russian Penal Colony to complete the rest of her prison sentence. Not knowing the exact location where she is being imprisoned has caused a great deal of tension and worry for fans. Additionally, being unable to communicate with her has led people to fear that she is being mistreated.

In order to understand how we got here, we need to take a look at all the events that transpired in Griner’s life over the last year. Doing so will help us ascertain how she is now being transferred to a remote and isolated Penal Colony. Moreover, we should also know how the general public and fans feel about this whole situation.

What is a Russian Penal Colony?

One would presume that the creation of a Penal Colony is to utilize the workforce and physical capabilities of prisoners in the Russian legal system. Simply locking them away in cells and feeding them 3 times a day would do nothing but drain resources. Therefore, these colonies were established to sustain the large number of imprisoned people that a country like Russia possesses.

Perhaps if WNBA players were paid better, Brittney Griner wouldn’t be on her way to a Russian Penal Colony?

As most of us already know, Brittney Griner was arrested on February 17th, 2022. The charges filed against her were for the smuggling\transporting of illegal substances. All she did was “accidentally” carry a few Marijuana Vape cartridges hidden in her luggage through a Russian airport.

We strongly protest the movement of Brittney Griner to a remote penal colony and the Russian government’s use of wrongful detentions. I am committed to bringing home Brittney Griner and Paul Whelan as soon as possible.

Thinking endlessly about Brittney Griner. Two weeks of unknown whereabouts en route to a Russian penal colony possible in Siberia. I just can’t. She was just minding her business. 💔

The Russian authorities might have decided to make an example out of Griner. They sentenced her to 9 years in prison, despite her pleading guilty in hopes of a lenient ruling. There were several talks of a potential prisoner swap. However, nothing really worked out and her latest appeal had overturned.

Sent to a penal colony while the US and Russia decide whether an exchange of prisoners will happen, leading to her release. #FreeBrittneyGriner

Well, I’m sure she feels differently now. And even if she doesn’t, she has a right to make such comments here without being punished for it. That’s what makes this country special. The bottom line is she is an American being used as a pawn. That is not right.

This is so sad. Praying for her to come home. 🙏

From Brittney’s romantic partner to players in the WNBA, everyone shared their frustration over this entire incident. After all, the working conditions and treatment of people in these colonies are quite deadly. Therefore, people feel that Griner will be mistreated, now that she is in one of those colonies.

if any american is celebrating this at all, you have the heart of a commie. go reevaluate your life.

Really sickening that she’s serving 9 years after a white privileged American served days in jail for bringing in 19 times more than BG. Very convenient that Russia decided to move her during the US elections.

Absolutely unacceptable that the Biden administration did NOTHING for her. Hate on Trump all you want, but he would have had her home in a matter of days.

Finally, we hope that these fears are nothing more than paranoia and that Griner is safe and sound. Hopefully, nothing untoward happens to her and she is able to return to her loved ones soon enough.