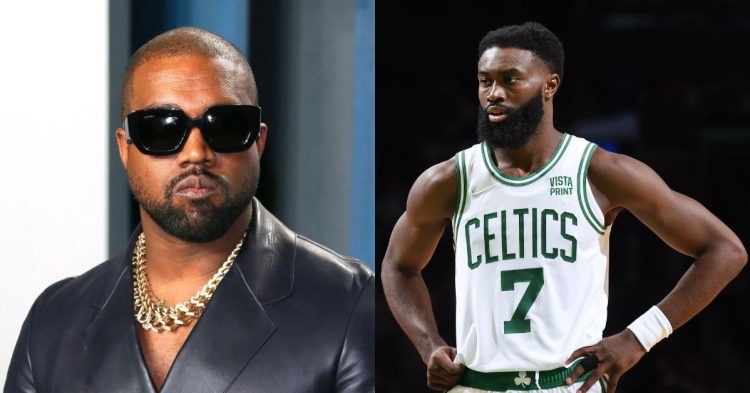 Boston Celtics star Jaylen Brown became of the first athletes to publicly sign with Donda Sports. He put pen to paper with rapper Kanye West‘s agency back in May. Along with Brown, NFL star Aaron Donald was also a part of the agency.

However, things have taken a drastic turn for Kanye West in recent times. Social media platforms like Instagram and Twitter banned the rapper for his hate speeches and anti-Semitic views. It reached an extreme where even LeBron James had to decide to drop an episode of “The Shop”. Amid all this, Jaylen publicly announced that he will continue to stay with Donda Sports despite the backlash Kanye has been receiving.

However, it has become a completely different case right now. After Jaylen received plenty of harsh criticism, the Celtics forward decided to cut ties with Kanye West and Donda Sports earlier today. His official statement has received plenty of attention from Twitter users lately.

Many have had a go at Brown for how late he decided to cut ties with the rapper. A fan said, “So you were fine with Kayne representing you up to this point with all his anti-black statements but now it’s too far. This was a business decision, nothing more.”

So you were fine with Kayne representing you up to this point with all his anti-black statements but now it’s too far 🤔. This was a business decision, nothing more.

Similarly, another user wrote, “But when kanye was denigrating blacks, where was the same energy? Where were the companies?” It seems like NBA fans are disappointed with the fact that Brown had let the situation escalate to this point for him to separate himself.

But when kanye was denigrating blacks, where was the same energy? Where were the companies?

The people believe that the 26-year-old should have drawn the line when Kanye made the “anti-black statements”. In addition to that, the opinion is that the American player only announced that he will not be a part of Donda Sports anymore because of the backlash he received.

JB only did that because people got on his ass about it, yesterday he said he was staying

The community believes that Brown did not arrive at the decision he made on his own. The main reason for that would be the fact that he publicly stated that he will not be leaving Donda Sports, and then decided to turn back and leave the agency. This has raised many eyebrows as the fans do not seem to buy it.

Jaylen Brown endorsing cancel culture. The man needs to make his own decisions, not let others tell him what they think is best for him.

Amid all this controversy, a fan has had a unique take on the situation. They wrote, “For only putting out this statement bc his agent told him to lol? NBA players will do almost anything to make money or protect their money… like stay quiet about China.”

For only putting out this statement bc his agent told him to lol? NBA players will do almost anything to make money or protect their money… like stay quiet about China 😉

The tweet seems to be a dig at Brown for stating his move publicly only because his agent told him to do so. However, it is also a jibe at LeBron James as the fan mentions players will do anything to make money. For context, fans have questioned King James many times by the world about his silence on issues relating to China. Many have even claimed that he received “hush money” for his silence.

Brown’s decision may have come under fire right now. But many believe that he did the right thing by deciding to leave the Donda Sports agency and Kanye West.