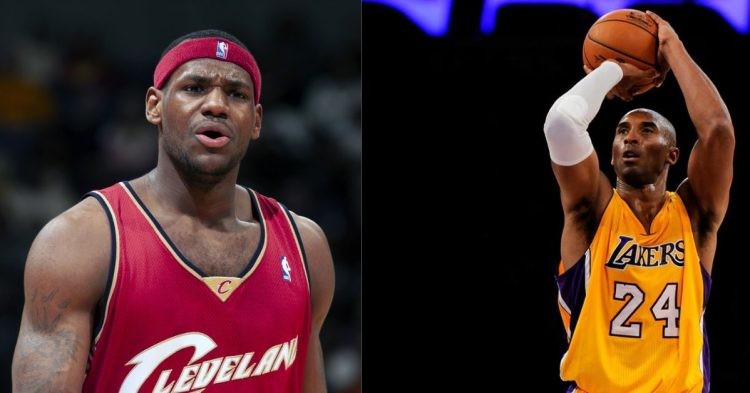 LeBron James and Kobe Bryant on the court (Credit: Twitter)

A rookie LeBron James was once asked about Kobe Bryant and his historical 81-point game. The answer given by James has earned him quite a large amount of flak and criticism from NBA fans. This is mostly through mediums like social media where footage can easily be made public.

In fact, fans have even gone as far as to accuse the 4x NBA champion of lying in regard to this subject. We should wonder what LeBron James said and why NBA fans seem to think there is no genuinity to it. This is only possible through understanding the context of the situation and how the game worked back then.

It looks like King James is building up a reputation of making up things to say simply just to sound innately smart or perceiving. This is something that NBA fans have called him out for ruthlessly on social media.

We would assume LeBron doing this after becoming an NBA legend makes sense. However, he seems to have engaged in this form of behavior all the way back to his rookie years. Kobe Bryant was still in his prime back in 2006 and went off for a monster 81-point game.

It is simply nearly impossible to predict when something like that is about to go down. Be that as it may, James had no problem in claiming he did just that.

“I was at home watching the game and I said he was gonna…before the game even started, when I seen uhh, I said he was probably going to score 70 tonight. I don’t know what made me say that. My friends was with me and they was like okay.”

What a young LeBron James was saying seems highly unlikely. Especially considering that only 6 players in NBA history have managed to score 70 points in an NBA game. Moreover, he doubled down on his statement.

We are all free to choose whether to believe him or not. However, it is a certainty that the majority of the NBA world does not believe he was telling the truth in that situation.