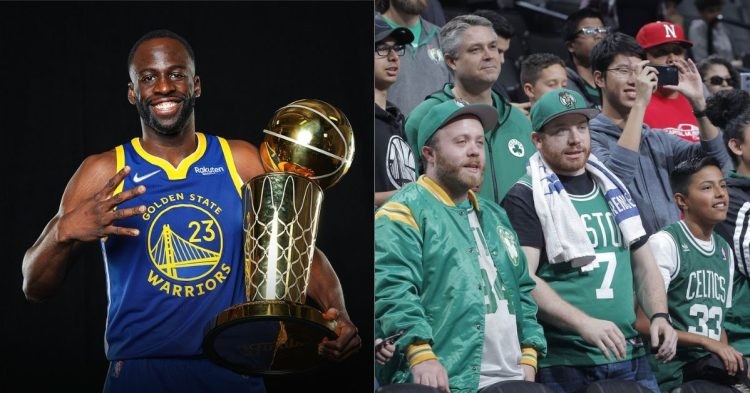 The Golden State Warriors have proved to the world that failure is just a stepping stone back to the days of the dynasty. After 2 straight seasons of watching the playoffs from their couch, they have brought the Larry O’Brien trophy back. And during their post-game celebrations, they made sure to use Draymond‘s name to mock the Boston Celtics’ fans.

The Boston Celtics entered the NBA finals as the hottest team in the NBA. Their young core had finally developed to All-NBA caliber to get past the conference finals. Knowing that the Los Angeles Lakers had tied their record of NBA titles, they needed to win one to re-establish the lead. But they were coming face to face with the team that defined this decade and had no experience in that regard.

Boston Celtics lost the game and the bragging rights

In-game 3 of the NBA finals, the Celtics and Warriors were tied 1-1. They stole a game from the Bay. And were able to defend home court in game 3. They even took a 2-1 series lead. The Warriors were the team that looked backed into a corner. Draymond Green fouled out in the clutch and the Warriors lost their defensive anchor. That made that win even easier to come for the Celtics.

Boston fans are some of the worst sports fans and they started a ‘F**k you Draymond’ chant that even Green could not tune out. But this set-up a rerun of what took place between the Grizzlies and the Warriors with their song of ‘Whoop that trick’.

Green had a stat line of 12 points, 12 rebounds and 8 assists. It seemed like he had a bigger impact on the game than Jayson Tatum. Hence, once they won, they were in Boston, chanting ‘F**k you Draymond’ to directly mock the fans that stook around.

“Fun moment. Draymond been yelling at us all year, too.”

Kevon Looney even slid in the fact that they even meant a little of that chant for Draymond Green who pushed them around whole season. This was the ultimate payback from the Warriors to Boston fans.

I Have Some Options: Coco Gauff Trying to Decide Her Mixed Doubles Partner for Wimbledon 2022