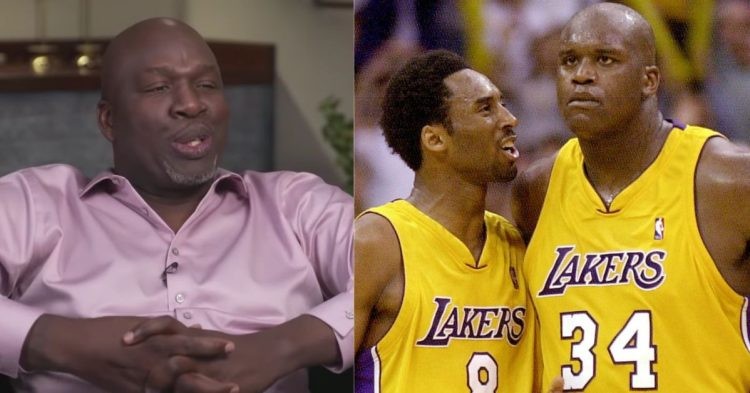 Kobe Bryant and Shaquille O’Neal are considered the greatest one-two-punch combo the NBA has ever seen. Amusingly enough, just like the nickname signifies, both of them once got into a fistfight and tried punching each other. Former NBA player Olden Polynice revealed that he was the one responsible for making sure things didn’t get out of hand.

We are all familiar with the current situation in the NBA. The incident of Draymond Green punching and injuring his teammate Jordan Poole during practice has taken the headlines. Since both these fights have a similar essence, Polynice’s story could not have come at a better time. One may wonder what he said as not all of us were around when Shaq and Kobe had their own fight.

This was all the way back when Kobe and Shaq were both still in the league. While they certainly made a great combination, they had several differences that caused a lot of friction between them. Some of the most prominent differences included their very approaches to basketball and work ethic. Simply put, Kobe Bryant was a young determined workaholic who thought he should hold Shaq accountable.

On the other hand, Shaquille O’Neal was an unreal force simply because of his god-given strength. He initially saw Kobe as nothing more than a young buck who would have to follow the pecking order of the team. As both players developed, these conflicting ideologies created a hostile environment between them.

Polynice discussed the infamous fight incident in great detail when asked to explain in his own words what happened when these two fought.

“So we were summertime playing basketball at a workout and I still remember the laker personnel over in the corner everybody ya know we just playing and we get into an argument and next thing I know I’m thinking it’s like joking around…. it’s getting real serious it’s my team its my team all that foul language then the square up .And I’m like cmon guys break it up break it up as I’m doing that …Kobe I can’t remember what he said what he did but Shaquille reeled back and threw it and i grabbed him and part of the punch hit me right here and rest followed through on Kobe.”

He pointed at his cheek and explained how close he was to getting hit by Shaquille O’Neal instead of Kobe Bryant. We all know that Kobe and Shaq soon went their separate ways. One must wonder if Jordan Poole and Draymond can do things differently in current times.
Tags: Kobe BryantNBAShaquille O'Neal
Previous Post