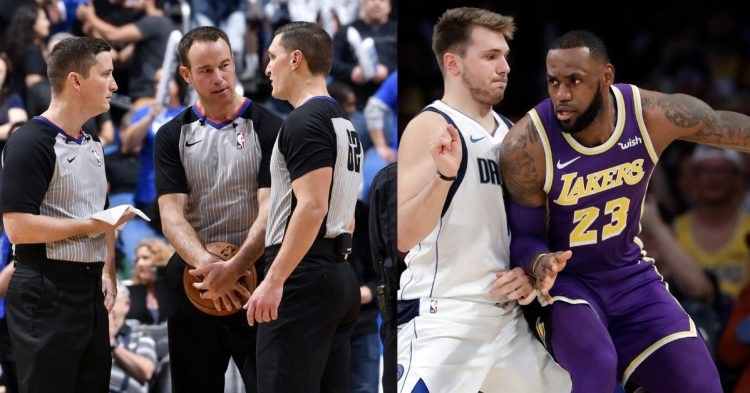 It appears that NBA referee Josh Tiven is under a significant amount of scrutiny and might just be investigated after a controversial call or the lack of one against the Los Angeles Lakers in their recent match vs Luka Doncic and the Dallas Mavericks.

Should this have been a foul? 👀

NBA fans will be aware that this was a very close game and actually went into double overtime. Luka scored 35 points, 14 rebounds, and 13 assists playing a ridiculous 53 minutes of this game. While he was certainly the best player on the court and deserved this win,  some people feel that a few of the possessions in this game were officiated quite badly.


It would seem like referees are being put under pressure and are slowly becoming answerable for some of their questionable calls. With that being said, we should wonder in Josh Tiven should truly be blamed and more about the context of this game.

NBA referees are only human and certainly can make mistakes. However, considering that there are multiple officials on the court and slow-motion cameras, we should wonder what excuses can be made for certain mistakes that influence the game.

As we all know, LeBron James and the Los Angeles Lakers are desperate for wins and to make it into the NBA postseason. At this stage of the season, every loss would hurt them deeply and push them into the lower half of the Western Conference.

Thus, the Lakers entered this match hungry for a win against the Dallas Mavericks. The game was incredibly close and Luka Doncic hit a clutch step-back 3-pointer over Denis Schroder in order to tie the game for his team. He did so with 6 seconds left in the game.

In order to answer, LeBron James had the ball and tried to drive to the rim. However, he was met by a double team and decided to pass the ball to Troy Brown Jr. Brown caught it and shot a contested three-point shot over Tim Hardaway Jr.

He missed the shot and looked very upset that he wasn’t given a favorable foul call. The game went into overtime and soon the Dallas Mavericks won. Be that as it may, many NBA fans feel that this foul call should have been given to the Lakers by Josh Tiven.

That’s one of those missed calls that deserves to be investigated. Can’t get anymore blatant than that.

“That’s one of those missed calls that deserves to be investigated. Can’t get anymore blatant than that.”

It’s literally not a foul in the rule book

In all fairness, fans have mixed opinions on whether this was a foul call or not. Some think that this could also be an act of indicating excessive contact in order to justify a miss, none of this changes the fact that the Dallas Mavericks won this game.