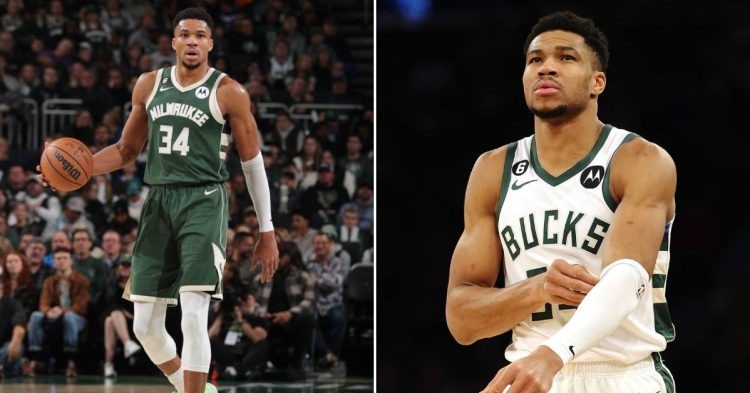 Giannis Antetokounmpo has had quite the season so far. He has helped the Milwaukee Bucks to a 3rd seed in the Eastern Conference standings. The Bucks have a record of 27-15 so far in the 2022-23 NBA season and it looks like they will be making the playoffs comfortably as well.

However, Giannis has been having quite some trouble with staying fit for some time now. He has missed a few games this season and it is not all that surprising considering how he has been performing game in and game out. This has ultimately led the Bucks to lose their star player, which automatically reduces their chances of improving on their current spot in the East.

ESPN Sources: Milwaukee Bucks star Giannis Antetokounmpo is expected to be out today vs. the Miami Heat (ABC, 1 PM). Antetokounmpo has been dealing with a sore left knee.

The NBA world expected Giannis to feature against the Miami Heat today until reports of his injury emerged out of nowhere. It has been a shock to Bucks fans, who lost to Jimmy Butler and Co. in the last game as well.

When is Giannis Antetokounmpo returning from injury?

Sources mention that Giannis did not play against the Heat because of left knee soreness. Ultimately, this would have been the good news that Bucks fans would have wanted to hear. It is certainly not a serious injury that will keep him away from the action for a significant period of time.

The Bucks did not list the Greek Freak on their injury report for tonight’s game initially. Fans surely believed that they would witness Giannis bounce back from a disappointing performance against the Atlanta Hawks in the last game. Against the Hawks, Antetokounmpo only made 7 points, which was shocking considering the standards he has put up since joining the league in 2013.

Although one can claim he had a day off in the scoring department, he still made 18 rebounds and 10 assists for his team. It only reminds us how versatile of a player he is. We can only wait and see if the Bucks miss his services against the Heat tonight.

As for his injury woes that have been bothering Bucks fans, it was the same injury that kept him out in the last game as well. However, we can expect the 28-year-old to be back on the court against the Indiana Pacers on January 16.