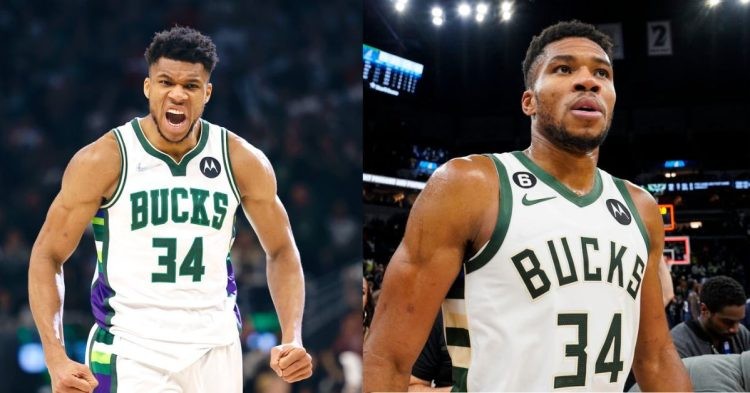 Giannis Antetokounmpo has turned into one of the best NBA players this decade, and at 27 years old, he shows no signs of stopping.

Antetokounmpo, fondly known as the “Greek Freak,” has done justice to his nickname with his MVP-caliber performance day in and out.

The Greek NBA superstar has improved year after year, and this year is no different as he has averaged 31.9 PPG and put in a solid 12.2 RPG with 5.8 RPG.

GIANNIS ANTETOKOUNMPO WITH THE STRETCH FOR THE POSTER 💥pic.twitter.com/YynH3M59Si

Excluding his rookie season (24.6 PPG), Giannis has been an outstanding performer and had an average of 30+ PPG in six consecutive seasons.

Giannis has started the season on a hot streak and will be looking to dethrone Jokic at the top of the pile after the Serbian international won back-to-back MVPs in the 2020-21 and 2021-22 NBA seasons.

Who is leading the NBA MVP race?

The season has only begun, yet there is so much hype for the season MVP as players continue to excel in the games, even carrying their teams to certain victories.

Unsurprisingly, Giannis is leading the NBA MVP race this year, with 33.6 ppg to his name. However, he faces tough competition from Luka Doncic and Donovan Mitchell, who have all excelled this season, and have turned many heads with their performances.

Luka Doncic has started the season in blistering form

Doncic’s rise to the elites of the basketball world continues as he dazzles his way to the MVP rankings, averaging 36.1 ppg with 9.0 APG, and we’re just ten games into the season.

He recently became the second player in NBA history to score 30+ points in eight successive games, joining Hall of Famer Wilt Chamberlain at the top of the pile.

Donovan Mitchell has forced his way into the MVP running

Donovan Mitchell is a surprise addition to this list, as the Point Guard finds himself at the heart of the Cavs’ recent success, even becoming the third player in NBA history to score 30 points or more in the first three games of his new franchise.

His Cavaliers team sits comfortably at the 2nd spot in the Eastern Conference with an 8-3 record.

Donovan Mitchell had 38 in the loss last night.

Mitchell is averaging 31.1 PPG and 7.1 APG and looks like the dark horse in the NBA MVP race.