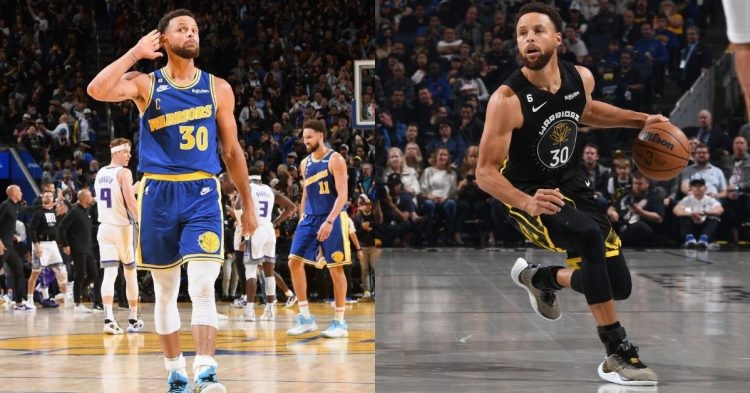 For the past 3 games, Stephen Curry has looked like the best basketball player on this planet. In his last 3 games, Steph has averaged over 40+ points per game. During these insane performances, the Warriors have won 2 games and lost 1. If he can keep this away, the chance of Steph winning MVP will shoot up rapidly.

Stephen Curry over his last 3 games:

But, this is nothing new for Steph he has been a part of MVP conversations almost his entire career. Luka and Giannis might be having the season of their life but Stephen Curry is not too far behind. He is averaging 33 points, 6.8 rebounds, and 6.7 assists per game which is absolutely ridiculous at the age of 34.

Why has Stephen Curry been left out of the NBA’s MVP ladder?

Despite having a monster season Steph is yet to be top 5 on this season’s MVP ladder. Well, the main reason behind this is because of his team’s record. Curry is doing amazing as an individual but his team has been suffering so far this season.

Who has your vote for end of season?🤔 #NBA pic.twitter.com/FnZTNQUpJA

Without the help of his team, there is only so much that Curry can do. But help might not arrive any time soon since Klay Thompson has yet to return to his old self, Draymond’s age is finally catching up to him, and the rest of the team like Wiseman and Kuminga are too young to shoulder the team’s offensive burden.

Will the Golden State Warriors win the title again?

This team has all the right tools to win a championship again this season. If anything there is a chance that the rest of the players apart from Curry aren’t performing well because of the championship hangover. If that is the case then soon enough the Warriors should be back to normal. Maybe the team is just off to a slow start.

Steve Kerr is doing everything in his power to get this team to look like what they did last season. It should only be a matter of time before the reigning NBA champs start acting like the great team that they are.