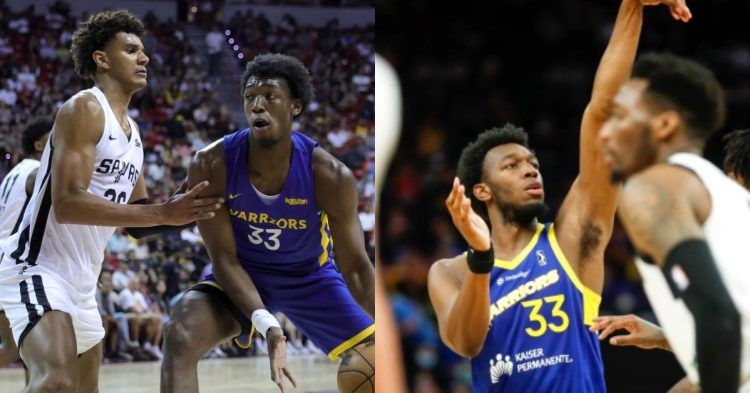 The reigning NBA champions have begun their new campaign to defend their title and attempt to win one more. Last season it was the young players that were the wild cards. And hence, the Warriors need to lock in right from summer league. Former 2nd overall draft pick, James Wiseman made his return in his summer league debut against the Spurs.

James Wiseman played in the shortened 2019-20 NCAA season where he averaged 20 points, 10 rebounds, and 3 blocks in 3 games. He got lucky as the Warriors somehow landed the 2nd overall pick and drafted him. In his first season in the NBA, he averaged 11 points and 6 rebounds. He filled the weakest position the Warriors had and became the cornerstone on which GSW could continue its legacy.

James Wiseman puts on a show in their summer league debut

James Wiseman had a rough start to his career. He picked up a knee injury that kept him sidelined for the entirety of the 2021-22 NBA season. The Golden State Warriors won an NBA title without him and he’s already got the label of ‘being carried’. Also, Jordan Poole and Jonathan Kuminga have played enough to take precedence over the 2nd overall pick as well.

Hence, as a sign of recovery, Wiseman played his first summer league game against the San Antonio Spurs. He finished the game with 11 points, 2 blocks, and 2 rebounds on 5/7 shooting. He looked a bit passive as Kuminga and McClung were taking control of the game.

However, he was efficient and did show signs of his defensive capabilities. At the half, the Warriors were down by 13 points. But in the 3rd and 4th quarters, they outscored the Spurs. They won by one point. The final score was 86-85. Wiseman finished the game with a positive +/-.

The thing about the Golden State Warriors is that their fanbase has stuck around since the dynasty rose. Seeing Wiseman put on highlight after highlight got them even more excited for the start of next season.

Jordan poole and James wiseman off the bench next year pic.twitter.com/AEQlZZojln

He’s already bein compared to his idol and his perfect dynamic duo.

A helathy James Wiseman is just gonna make our Warriors even deadlier 👀 pic.twitter.com/kYuynVGvFF

Even though he did not lead in the scoring, fans truly appreciate the intangibles he’s been putting in, through his hustle plays.

His footwork and ability to create his shots was Hakeem-esque. Fans were very hyped with his play.

Rumors were floating around of a potential trade for KD being made by Golden State. If Wiseman continues his comeback, the trade value for him could shoot up. And James Wiseman could be starting next season in Brooklyn. We’ve seen the NBA be a cutthroat business at times and so this is not out of the realm of possibility.