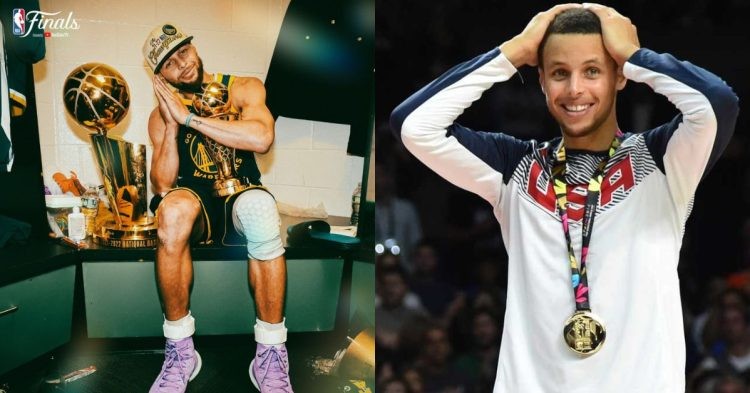 The 2022 NBA finals came to an end with the best dynasty in modern history getting a revival. The Golden State Warriors took care of the Boston Celtics in 6 games. Winning in the finals gave the Golden State core their 4th NBA title in 8 years and Stephen Curry won his first-ever finals MVP. Head coach Steve Kerr believes it’s time for Curry to win an Olympic gold medal.

On the international level, he’s won 2 gold medals at the FIBA world cup. But Stephen Curry still lacks an Olympic medal and it could be what he targets next.

Why has Stephen Curry never played in the Olympics?

Stephen Curry has taken part in multiple international competitions. He’s broken records for team USA. However, throughout his career, he’s never had the opportunity to play in the Olympics. The Olympics is the greatest international level tournament for all sports.

In 2016, Stephen Curry withdrew his name from Team USA due to ankle and knee injuries. In 2020/21, Stephen Curry sat out again from the Tokyo Olympics.

“It just wasn’t right for me…Very confident in that decision…No regrets at all. Obviously being here, playing golf, and having fun with my family that’s a personal thing. But there’s always that itch to play and play on the biggest stage, like the Olympics. But it just wasn’t the right thing for me and the right time.”

Steph had his eyes laid on winning the NBA finals MVP. He wanted to rest during his time off to recoup for the following season. Now that he’s completed that achievement, his head coach believes he should focus his interests someplace else.

“What he’s missing is an Olympic gold medal. And I think he really needs to concentrate on making the 2024 Olympic team.”

Asked if Steph Curry was missing something before winning Finals MVP, Steve Kerr said, “what he’s missing is an Olympic gold medal. And I think he really needs to concentrate on making the 2024 Olympic team.”
For the uninitiated: Steve Kerr is the U.S. men’s Olympic team coach.

Steve Kerr is the head coach for Team USA during that Olympic run and he would love to have his star player represent him. However, this is all still up to Curry, who could not have any inclination to spend his offseason working.