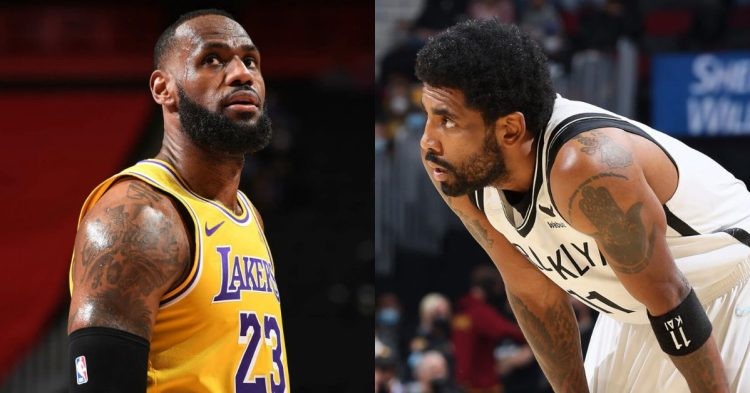 LeBron James has always been one to share his unique perspective and opinions with the world. In the past, he has had his say on many sensitive matters going on around the world. A huge example of that would be when he was publicly supporting the Black Lives Matter campaign, and still does from time to time. However, many had a go at him for not speaking out about Kyrie Irving‘s recent controversy that is shaking up the NBA world.

For those who don’t know, the Brooklyn Nets star shared a tweet of a movie. The movie promoted anti-Semitism and hate speech. Many immediately condemned this, and Kyrie was suspended by the Brooklyn Nets board. That was after Adam Silver and Nets owner Joe Tsai publicly criticized the 30-year-old for his tweet.

However, Kyrie later apologized on Instagram. He remains suspended as the franchise has given him a list of things to follow. He has to fulfill these if he wants to play for the team again. Now, LeBron has finally opened up on his former teammate’s current situation.

King James tweeted, “I told you guys that I don’t believe in sharing hurtful information. And I’ll continue to be that way but Kyrie apologized and he should be able to play. That’s what I think. It’s that simple. Help him learn- but he should be playing. What he’s asked to do to get back on.”

💭 I told you guys that I don’t believe in sharing hurtful information. And I’ll continue to be that way but Kyrie apologized and he should be able to play. That’s what I think. It’s that simple. Help him learn- but he should be playing. What he’s asked to do to get back on

As mentioned earlier, the LA Lakers superstar has claimed that he does not believe in sharing information that hurts others. However, he believes that he should be forgiven now that Kyrie has apologized to the world and the Jewish community. LeBron mentions that the NBA world should help him learn.

This was one of the conditions that the Nets had listed to the player. It was that he should be open to having meetings with Joe Tsai and Jewish leaders to understand the impact he had on the world. In addition to that, Joe Tsai also mentioned that he would have a conversation with Kyrie to help him realize how he could improve when it comes to sensitive matters.

the floor I think is excessive IMO. He’s not the person that’s being portrayed of him. Anyways back to my rehab session.

In addition to that, LeBron also mentioned that “the floor is excessive”. He takes a direct shot at the media for portraying him in a way that he’s not, James mentions. This shows that he sticks up for his former teammate in a way, especially during a team when Kyrie needs the support the most.

It is still not known when Kyrie will be back for the Nets. The franchise caused a commotion on the Internet recently when they removed Kyrie’s name from the status report for the most recent game. We can only wait to witness how this plays out for Kyrie and his future with the New York-based franchise.