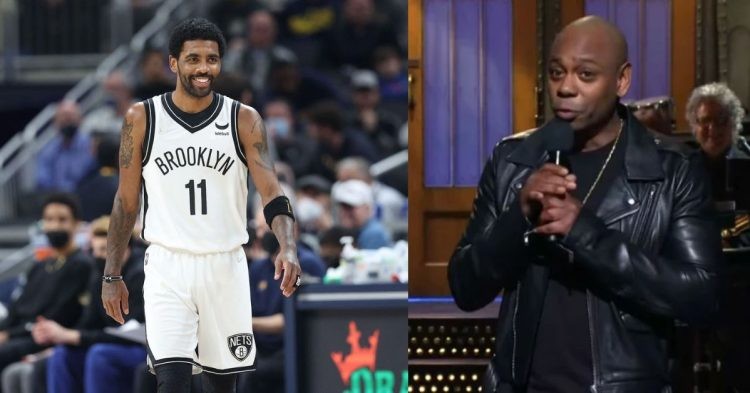 Kyrie Irving smiling on the court and Dave Chappelle during an act (Credit: Twitter)

It looks like news of Kyrie Irving being suspended for his “anti-Semitic” behavior has spread so far that popular comedian Dave Chapelle ended up talking about it in a recent show. Most of us already know about the Kyrie Irving drama over the past few weeks.

The Brooklyn Nets suspended him for a minimum of 5 games. However, he is yet to play despite his suspension being 8 games in. We do expect him to be playing soon. Nonetheless, it is impossible to deny that he has garnered a lot of negative publicity.

With that being said, one should wonder what Dave Chapelle had to say on this issue. He is known for making controversial statements in order to engage with his audience. Therefore, we should not feel like he is slandering any group or individual as he is simply speaking his thoughts on this issue.

As many NBA fans know, Kyrie shared a link to a documentary that is considered anti-Semitic and potentially hurt the feelings of people from the Jewish faith. He eventually sent out an apology. However, it seems that the Nets have decided to teach him a lesson and further restrict him from playing.

NBA superstar LeBron James called out Irving initially. But then changed the tune of his opinion when he found out about the extended suspension. In any case, Chapelle also seemed to be defending Kyrie.

“Kanye got in so much trouble Kyrie got in trouble. Kyrie Irving posted a link to a movie that he had seen on Amazon, no caption on the post or nothing like that. But apparently, this movie had some, I don’t know anti-semitic tropes or something. And it was a weird title like From He-Bro to Ne*ro or something … He was slow to apologize and then the list of demands to get back in their good graces got longer and longer and this, this is where, you know, I draw the line.”

Chapelle went on to further share his take on the situation, “I know that Jewish people have been through terrible things all over the world. But you can’t blame that on Black Americans, you just can’t… Because Kyrie Irving’s Black ass was nowhere near the Holocaust. In fact, he’s not even certain it existed.”

Thus, he concluded on an amusing note, focusing on Kyrie’s bizarre theories. However, that does not change the fact that he was defending Irving. He directly called out the Nets for making a neverending list of demands. We wonder how all this will be felt back at the Nets front office and how they will react to it.