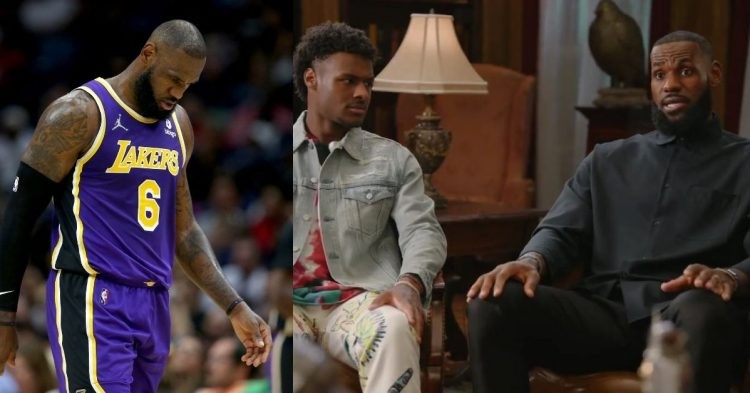 LeBron James and his son Bronny in the God of War Ragnarök interview (Credit: Twitter)

LeBron James is entering Year 20 in the NBA and still playing at an elite level. Additionally, he has engaged in several other activities off the court. Most recently, King James shared a tweet appreciating the God of War Ragorok crew including reputed actor Ben Stille, who was dressed as Kratos, the God of War for the event.

To those who do not know, the God of War franchise is centered around Greek legends and gods. Ragnorok will be the 9th game the franchise will be releasing. Both LeBron and his son Bronny were present during the interview and had a good time.

The 4x NBA champion’s tweet, “Who knew all I needed was a LeBrekthrough” caught the curiosity of the NBA world. We should wonder what happened in the interview and what this breakthrough is all about.

LeBron is the father of two sons and a daughter. He knows the challenges and struggles of parenting just as much as the next person. God of War is a story of Kratos’s anger and his eventual killing of his own father Zeus. While this seems barbaric and cruel, there is an analogy of the son surpassing the father.

Ben, who is known for acting in the “Night in the Museum” series is also a father. He discussed the parent-child dynamic while being dressed up as Kratos with LeBron and Bronny listening to him.

“The God of War dynamic plays out in every parent-child relationship. When that finally clicked for me, i felt truly close to my son for the first time…So when Atreus shot Kratos with an arrow must have hurt I mean no one can hurt you like your kids right, LeBron?.

LeBron took the chance to respond and share something amusing, “When Bronny said he’d rather play against me than with me….shot in the heart.”

Bronny turned and with an exasperated look on his face questioned, “Really”?. Ben Stiller went on to describe that as a “LeBreakthrough”. King James used the same words in his caption for the Twitter post.

NBA fans find this thoroughly funny. They instantly participated in commenting Le followed by something relevant. This has become a common trend over the years.

Some fans always take the chance to throw shade at LeBron. However, these comments are largely for attention and a place for haters to gather and show support. In any case, we can agree that Bronny clearly doesn’t want to be playing on the same team as his father.