Who Is the Beautiful Actress Michael Jordan Once Wrote a 20-Page Love Letter For? 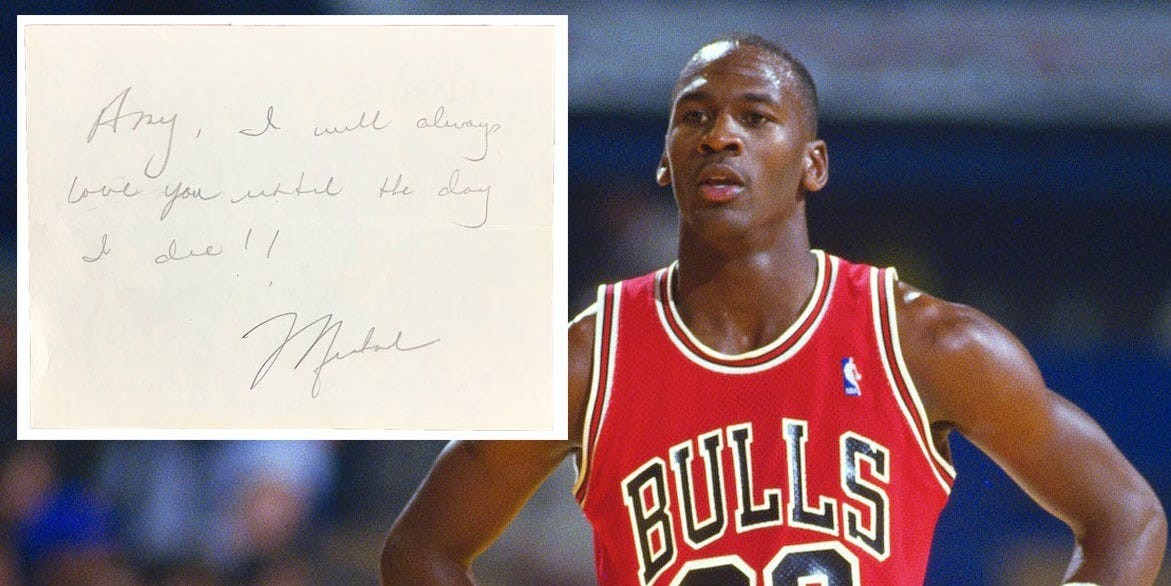 Michael Jordan has had a career filled with the most interesting stories. You saw a small glimpse of it in the smash-hit Netflix documentary, the ‘Last Dance’. But this man, who just turned 59 years old today, has a lot more stories that you have probably not heard about.

Michael Jordan is the best NBA player of all time and has one of the most successful shoe/lifestyle/ apparel company in the market. Even his Charlotte Hornets are in the right direction t0 be exceptional.

Apart from this, however, his other ventures and habits like baseball, gambling, and even his love life are things he wishes would be hidden from the world forever.

In June 2020, when the Last Dance was extremely popular, a 20-page love letter, that Jordan addressed to Amy Hunter in 1989, was sold for thousands of dollars.

Here is the story of Michael Jordan and that letter

Let me set the scene for you. Michael Jordan and the Chicago Bulls were playing in the 1989 Eastern Conference Semi-Finals. Jordan was 26 years old and had just averaged 33 points in the regular season. The Bulls were playing the Detroit Pistons. During an away game the entire Bulls team was staying in Guest Quarters Suite Hotel in Troy, Michigan.

Michael picked up a paper from the stationary and started writing to Amy Hunter who Jordan was deeply in love with. Hunter gained her fame as an actress and lead on the show Pacific Blue. She has also worked with Dwayne Johnson on Scorpion King.

Jordan was in a really bad place at the time. According to the letter, Jordan mentioned that he was having an affair with Amy Hunter which he had to end. The reason for this was that Jordan’s then-girlfriend, Juanita Vanoy was pregnant with his child.

Jordan was just establishing himself as a star in the league and needed to maintain his image. That meant leaving Amy Hunter no matter what he felt for her. He also signed the letter,

“Amy I will always love you till the day that I die.”

Michael went on to have 2 more children with Juanita before eventually divorcing her.

The Chicago Bulls ended up losing the series in game 7 of the NBA eastern conference finals.

This letter was brought to the limelight again when the letter was auctioned in 2020. The letter went on to sell for 25 thousand dollars and brought another topic of conversation on the Jordan’s personal life.