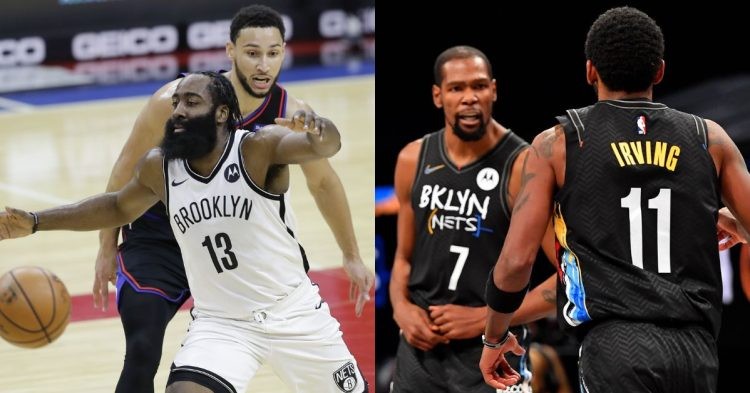 Actions have consequences, even in the NBA. Sometimes a contract being signed can have adverse effects and sometimes the assets involved in a trade can cripple them for the future. But in the rare case of the Brooklyn Nets, they made one player displeased and now the whole franchise is on its knees. Kevin Durant asking for trade put the final nail in the coffin for this team.

In the 2019 off-season, Boston Celtics star Kyrie Irving and Golden State Warriors star Kevin Durant were unrestricted free agents. All the signs and symbols suggested that they were going to New York emptying cap space for their arrival. However, they pulled a fast and signed with the other New York team the Brooklyn Nets. Everyone knew that wherever they would go, they would go together. But a couple of years in and everything has flipped on its head.

Did the Ben Simmons trade lead to Kevin Durant asking for a trade?

When KD and Kyrie signed to Brooklyn the aspirations were high. However, the first season of them together amounted to nothing due to Kevin’s injury and Kyrie’s stand. The next season, they began to showcase why they were feared. They traded for James Harden and made one of the best big-3 in the league.

The Nets were a ‘Kevin Durant-sized toe’ away from winning the NBA title. They lost to the 2021 NBA champions Milwaukee in the 2nd round, in game 7, in overtime, by just 4 points. The next season, which was last year, the trio spent barely any time together. Kevin Durant picked up another injury and Kyrie Irving was banned from playing in NBA games. James Harden was on the court but began to develop off-court issues.

And here is where the first domino fell. The animosity between Harden and the Nets got too much. James asked for a trade. He was granted that by being traded to Philadelphia for another disgruntled star in Ben Simmons. After that trade, the Nets expected that the problems would end. But Simmons could not play a single game in the regular season because he was not in game shape.

Ben Simmons was healthy during the playoffs but sat out because he did not want to be a part of the team that got swept in the 1st round. Talk about throwing a team under the bus.

Kyrie and KD decided to leave

Getting swept in the first round is embarrassing and leaves a stain on a legacy. Kyrie Irving was the first to attempt to save himself from the burning building. He told the Nets that he did not want to pick up his player option and was threatening to become an Unrestricted free agent and leave the Nets with nothing. That drama spiked rumors of KD wanting to leave as well.

Kyrie did not find any team that would want to trade for him so he picked his player option. But the damage had been done as Kevin Durant asked for the Brooklyn Nets to trade him on the first day of the 2022 free agency.

Everyone in the league will want Durant which means that he will be traded. And Kyrie Irving will now have the upper hand to be traded to a team like the Lakers for Westbrook’s bad contract. And it all began because they could not keep James Harden happy. Actions have consequences, even in the NBA.