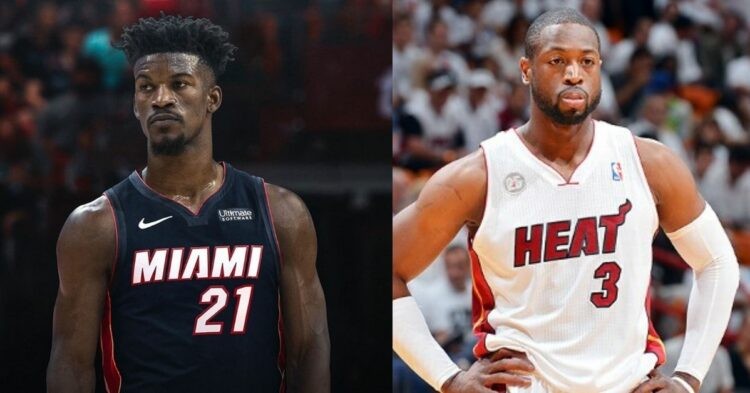 Jimmy Butler put up a show in the Eastern Conference Finals. He scored 47 points, 9 rebounds and 8 assists to will the Heat to victory in game 6. Dwayne Wade is a former NBA champion with the Miami Heat. He was in contact with Butler before the game.

D-wade has had an illustrious career. He has won 3 NBA titles with the Miami Heat. He has been in several difficult situations throughout his lengthy career. Therefore, his advice was well received by Jimmy.

Jimmy has been proving the NBA world wrong for a while now. The media has attempted to portray him as unstable and as a toxic teammate. However, he has carried every franchise he has been with further than they were before. This is a characteristic only a few superstars in the league have.

Jimmy Butler was struggling in the previous few games. The Heat was seemingly out of sync and had a lack of offensive firepower. At this time D-wade called Jimmy and conveyed the following.

Wade called Jimmy before game 6 and the essence of the conversation was later revealed by Butler. D-Wade had called Jimmy to fill him with confidence. He told Butler that he could do “this“(defeating the Celtics on the road) and that no one cared if his knee was banged up.

Dwayne also knew what Jimmy brought to the Heat and how he has performed in the past few deep postseasons pushes. Therefore, he also told Jimmy to continue to build that very legacy.

It is not easy being described in a way or having a certain narrative established. Butler must have been under some unreal pressure and criticism as he approached game 6. This is the price of being the sole star on your team.

Wade knows this and gave him a confidence booster when he needed it the most. As a result, Butler was able to dominate game 6. He also thanked Wade and said that his words meant the world to him.